Three Crown Casino bouncers say they were acting in self-defence when they threw a patron to the ground, allegedly breaking his nose and elbow, a Victorian jury has heard.

Quoc Hai Tran, 34, Jacques Tony Fucile, 30, and Nicholas Vladamir Levchenko, 26, are standing trial in the Victorian Supreme Court over their restraint of two patrons at the Melbourne casino. 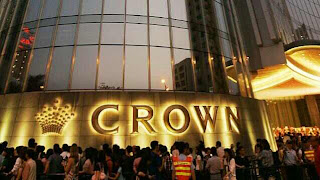 They are facing assault-related charges alleged to have occurred when they restrained Olivia Ferguson and Matthew Anderson on July 3, 2011.

In his opening address on Wednesday, Crown Prosecutor Andrew Tinney SC said the couple had been drinking at the casino with their friend Anthony Dunning when they realised he was being escorted from the building for being intoxicated.

Mr Tinney said the couple began following Mr Dunning out when Ms Ferguson turned around and slapped Tran in the face, apparently in response to a comment he made.

She was then slammed to the ground by Tran and restrained in a painful 'shut-down' hold in which her wrists were bent back towards her body, Mr Tinney said.

He said Tran's reaction was out of proportion to Ms Ferguson's 'powder puff blow' and was driven by anger and aggression.

When Mr Anderson turned to see his partner restrained by two men, he took a step in her direction before being slammed down by Levchenko and Fucile, said Mr Tinney.

Mr Tinney said Mr Anderson's face was repeatedly slammed into the floor until his nose bled while being told his partner was a 'slut'.

'This man has done nothing at all,' Mr Tinney said.

'At no point did Mr Anderson resist, or fight back, or struggle in any way whatsoever.'

Mr Tinney said the couple were then ejected from opposite ends of the casino, with Ms Ferguson sent out of a non-public exit, alone, at 11pm.

He said the most important evidence in the case would be CCTV footage which captured the incident - part of which was played to the jury.

Lachlan Carter, for Tran, said it was initially Ms Ferguson who was to be charged for allegedly assaulting his client.

He said Tran, a man of good character, acted in self-defence and disputed that strong restraint was applied to Ms Ferguson.

Ian Hill QC, for Levchenko, said his client was dealing with a threatening situation in a public place.

He said Levchenko's actions were justified on the basis of self-defence and there would be dispute about the extent of Mr Anderson's injuries.

He said three Crown bouncers were charged over his death but were acquitted.
The hearing continues before Justice Lex Lasry.

The unshakable Australian gambling institution that takes $5 billion annually from Victorians contributing valuable tax dollars to government is virtually above any laws.

The thugs that operate within are also supported by the Anglo-Masonic legal system.

Illegal drug deals as well as high priced hookers are the norm at the casino, with approval from authorities and corrupt police.

Now you can kill patrons and get away with it?