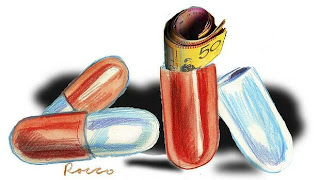 Patients are being deceived into taking drugs they don't need, that don't work or may put lives at risk, according to a scathing review of the influence big drug companies have on healthcare.

Drug companies ''masterfully influenced'' medicine, a joint review by Australian, British and US researchers has found, describing how the enormous profit involved in making and selling drugs gave the industry power to influence every stage of the health system.

''As a result of these interferences, the benefits of drugs and other products are often exaggerated and their potential harms are downplayed,'' their research, published in the European Journal of Clinical Investigation, found.

A co-author of the paper, Emmanuel Stamatakis, from the University of Sydney's school of public health, said it was ''entirely illogical'' to rely on the pharmaceutical industry to fund medical research.

''The profits involved are just too large and the temptation to manipulate the evidence is difficult to resist, even when this may lead to the loss of lives,'' Dr Stamatakis said.

''Asking corporate sponsors to conduct pivotal trials on their own products is like asking a painter to judge their own painting to receive an award.''

He cited as an example anti-diabetic drugs that he said increased the risk of heart problems and were prescribed despite interventions like exercise being more effective.

One anti-diabetic drug, rosiglitazone, is still prescribed in Australia despite being pulled from the European and New Zealand markets after thousands of lawsuits were filed against its manufacturer, GlaxoSmithKline. The company was accused of deliberately withholding evidence that the drug caused heart attacks.

Drug companies funded, designed and controlled a large portion of the most influential medical studies, the researchers found in an evaluation of 600 clinical trials.

Trials funded by industry were four times more likely than those sponsored by not-for-profits to favour the sponsored drug.

The researchers also looked at the influence of drug company representatives using flawed evidence of drugs' effectiveness to persuade doctors to prescribe them.

''It is hardly surprising that clinical practice guidelines often are heavily focused on new costly interventions and only loosely follow the available evidence,'' the researchers wrote.

Medical writer and a senior research fellow with Queensland's Bond University Ray Moynihan said Australia was behind other countries like the US in reining in unethical behaviour by drug companies.

In the US, the Sunshine Act was introduced to allow anyone to look up which doctors receive industry funding.

''I think transparency is key,'' he said. ''The fact that you can go to a doctor and be prescribed a new drug, without them telling you they've learnt all about that drug at an industry funded event or a visit from a drug representative is outrageous, and it's unbelievable that it could happen in 2013 in Australia.''

The chief executive of industry group Medicines Australia, Brendan Shaw, said the industry made the medicines and vaccines people relied on.

"Industry engagement across the health sector is vital to patient outcomes and should be encouraged,'' Dr Shaw said. "Absolutely this needs to be co-ordinated in an ethical and transparent way, and the industry has a long track record of doing this.''

So why would Australian doctors accept drug company money?

''The pharmaceutical largesse takes Australian doctors all over the world on business class airfares and puts them in five-star hotels and yes, that can be good in terms of engaging with peers, but doctors should pay for that themselves,'' said Ken Harvey, who is part of the Medicines Australia transparency working group. ''It becomes a seductive, symbiotic relationship.

''Prestige can be just as important as money,'' he said.

In June the group will release its final recommendations on measures and policies to improve transparency of payments between healthcare professionals and the drug industry.

This kind of fraudulent practice has been going on for decades and show no signs of slowing down.

Doctors have been of the pharmaceutical company's payrolls for quite sometime, and even if the practice was 'outlawed' it would still occur.

In a Melbourne hospital, a patient has been given experimental drugs by doctors, to see the effects they have, and not to 'cure' or help the patient.

The patient was feeling worse that what he was admitted in to hospital, when upon asking another doctor's opinion, the doctor was outraged by the drugs given to the patient.

Currently the internet serves as as great resource tool for the masses, which doctors are not too thrilled about, something that was not available to the general public over a generation ago, especially in the medical field where information contained in (for example) the MIMS (Australian published drug information database) was strictly available to doctors.

Doctors should be sued for malpractice and banned from working ever again.

Since this is BIG BUSINESS it will never happen.