Vodafone CEO hits out at rivals' data 'rip off'

Vodafone CEO Bill Morrow says Australian mobile telecommunications companies are ripping off customers by making use of a trick which allows them to round up mobile data “sessions” to make data vanish quicker. 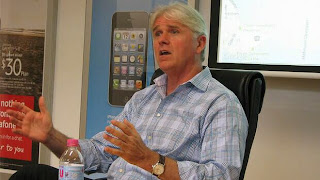 The comments were made at a briefing at the company's North Sydney office, where Mr Morrow revealed the company's 4G LTE network would go live in June. Vodafone is the last major carrier to roll-out such a network in Australia, but claims that when it goes live it will be the fastest in the country thanks to its better spectrum allocation.

The trick Mr Morrow said being used to rip off consumers involved many telcos rounding up mobile data sessions, sometimes to the nearest megabyte instead of kilobyte*, to milk more data usage out of customers.

"People really feel ripped off if they're having to pay for more than what they actually use," Mr Morrow said.

Vodafone used to take advantage of the trick and tried to standardise it across a number of its pre-paid mobile plans earlier this year. It abandoned it after customers “expressed concern”.
A speed test Fairfax conducted on a Vodafone smartphone at Vodafone HQ.

Most Australian telcos Fairfax Media surveyed in January that offered a pre-paid mobile services — where the trick to round up data is most common — participated in the practice, although some to a lesser extent.

"Most people don't understand the conventional way that telecom companies have set up their pricing," Mr Morrow said when referring to how some telcos charged for data. "If you're on [your mobile] and you only do one quick transaction then you shouldn't have to pay for something that would be equal to five or ten times that.

"It used to be that you had a minimum number of minutes [the telco] was going to charge you for a voice call whether you ended it in 20 seconds or not and [eventually] you saw kind of a granular pricing scheme [come in] where it got down to per second sort of billing. Well the same thing needs to happen on data," he said.

Mr Morrow said Vodafone was "industry-leading" when it came to charging only for what customers used.

"You'll find many others out there that will call it a transaction or a session [and charge per] megabyte."

When it is launched in June, Mr Morrow said the company's 4G network would be one of the fastest.

"We will ... at least for a period of time, be the fastest 4G network available in Australia," he said.

He said Vodafone staff were trialling the 4G network now and that when it launched it would be available in major metropolitan centres of Sydney, Perth, Melbourne, Brisbane and Adelaide, Wollongong, Newcastle and the Gold Coast. Speeds of up to 150 megabits per second would be possible on 4G in theory, but speeds much lower are likely, considering mobile towers share data between users. Speeds also depend on a user's distance from a base station.

"[The] five capital cities will be our focus," Mr Morrow said of 4G. "Each one will have a slightly different level of penetration within it in that first phase. [There will be] 1000 sites nationwide by the end of the year."

* How the telcos charge for data:

Virgin Mobile - Charges in 60 kilobyte increments on all pre-paid plans.

Woolworths Mobile - Charges in 1 megabyte increments on all pre-paid plans.

Boost - Charges in 1 megabyte increments on all pre-paid plans.

Crazy Johns - Charges in 10 kilobyte increments on all pre-paid plans.

Amaysim - Charges in 1 megabyte increments on all pre-paid plans.

The focus of this article is data 'rip off'.

The colloquial term 'rip off' is widely understood  for example from a customer's point of view that
or any number of other various scenarios.

According to Australian consumer laws, the above mentioned examples are illegal, i.e. criminal matters punishable by law enforced by police.

Theft or stealing (anything) is a criminal offence, and the masses are constantly reminded of this at petrol stations.

When corporations for example telcos or oil companies steal from the general population, there is no police intervention into the thefts by the corporations

To date there is no class action law suit by the masses for data theft by the telcos.

The telcos write the laws.

The police have a duty to keep the masses inline and subservient to the corporations.

Laws are set up in such a manner to punish the masses for any disobedience.

Corporations and authorities are above any laws they implement on society.