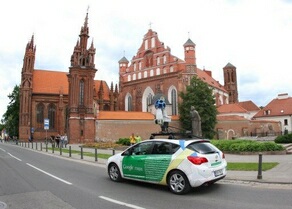 The Baltic state's tax authorities will now probe individuals whose buildings appeared to be worth considerably more than the declared value to determine if they sought to evade taxes, tax service spokesman Darius Buta told AFP.

Authorities absolutely adore companies like Google that collate and store information, as these companies liaise with the authorities, and are at their beckoning call.

Some information may indicate that companies of this calibre are set up with government personnel.

New laws are put in place that do not allow companies like Google to be prosecuted by the masses for information abuse, invasion of privacy or even the selling of one's private data.

New information indicates that Google will mapping inside public places, naturally for the benefit of the consumer, but also having access to your exact whereabouts at any time.

The sleepy 'sheeple' still do absolutely nothing with regards to this kind of privacy invasion.