The Ninety Billion Nightmare - the real cost of the NBN rollout

THE final cost of the NBN rollout could more than double and exceed $90 billion by the time it is finished, according to a new analysis contained in the Coalition's broadband policy. 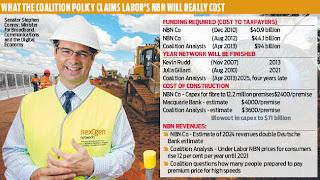 The Coalition policy claims retail prices charged to consumers would rise annually over the next nine years at double the rate of household electricity bills.

Using modelling from key telcos and finance industry analysis of the NBN Co's 2012 corporate plan, the Coalition has estimated it will take four years longer to finish and potentially cost an extra $45 billion to complete.

The extraordinary claim is made in a key document to be released as part of the Coalition's own national broadband network election policy, which claims the government had vastly underestimated the cost blowouts, delays and revenue returns of the NBN.

The NBN Co last year released a revised corporate plan which admitted to a $1.5 billion cost blowout in the capital cost - to $37.4 billion - with a total cost to taxpayers of $44.1 billion.

The Coalition document cited Macquarie Bank estimates from January this year of the real cost per household of the rollout, claiming they were 40 per cent higher than what was being forecast.

The document also estimated the current 50 per cent delay to the schedule if continued would mean it would not be completed until 2025 - a delay of four years.

The Coalition's estimates of the real capital costs suggested they would be more likely to reach $71 billion, not the $37.4 billion claimed by NBN Co's most recent estimates. The overall cost to the taxpayer, including overly optimistic revenue targets, would more likely reach $94 billion, the 12-page costing document claims.

Opposition communications spokesman Malcolm Turnbull is expected to release the Coalition's policy this week, claiming it will deliver a cheaper NBN based on a fibre-to-the-node (FTTN) rollout rather than the government's fibre-to-the-premises (FTTP) model.

"Australia ranks as one of the most expensive countries in the OECD when it comes to the cost of telecommunications," Mr Turnbull told The Daily Telegraph.

"Labor's NBN will hinder Australia competing effectively in the digital economy. The NBN doesn't have a budget - Labor have handed the NBN a blank cheque and asked them to keep the country updated as to how much it is costing."

Communications Minister Stephen Conroy has accused the Coalition of having "half baked broadband thought bubbles" rather than a policy.

Sections of the ICT industry have also claimed that while the Coalition's policy may reduce the cost of the NBN in the short term, it could drive the cost higher in the future due to what they claim are the inevitable upgrades to the system from not going fully fibre in the first place.

Corporate fraud occurs in many different shapes and sizes.

In order for mates to obtain the contract, falsified tenders or bids are put in place and won. After the initial works have started, projects suffer a 'budget blow out' or go into overtime, in effect putting the extra money into the coffers of the corrupt business owners and their cronies.

This method of doing business has been practiced in Australia for decades with the full knowledge and approval of the authorities at the expense of the Australian taxpayers.

It is very doubtful that any corrupt (and illegal) business deals will ever be brought forward before the Australian courts.

The NBN and Victoria's desalination plant are just two current example of fraud on a grad scale.

The real losers here are the Australian consumers.