THE swindler who ripped off Crown casino for $32 million will not face a police investigation.
And the Crown insider who helped him has also escaped scrutiny for his role in the matter.

The casino has elected not to ask for a police inquiry, despite the rip-off being the biggest in its history.

The Herald Sun last month revealed how the high roller and at least one accomplice had pulled off the massive sting. 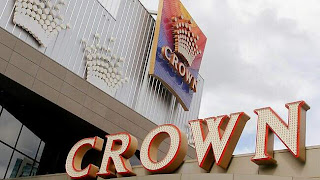 Crown's surveillance system was infiltrated and the complex's cameras used to spy for him during big money hands of cards.

The high roller's betting was tailored around the information picked up through the cameras.

The conman had been staying at a luxury villa in Crown Towers, and was involved in a major promotion at the casino in the period before pulling off the rort.

The high roller has been banned from Crown and a VIP manager sacked.

It is unclear whether the pair had a prior relationship or whether it was fostered during the guest's stay.
Crown said last month it was confident it could recover the money.

A Victoria Police spokeswoman said the force had been liaising with Crown casino over the scam.

"We have not received a formal complaint in relation to this matter, however we have been briefed on the issue," the police spokeswoman said.

Victoria police is able to pursue criminal charges against the 'swindler' even if the casino does not.

Crown casino is involved in money laundering, high class prostitution and drug deals on the premises all with the help of the authorities, namely Victoria Police.