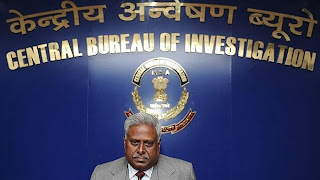 Central Bureau of Investigation (CBI) Director Ranjit Sinha was involved in a debate on sporting ethics. His position was that the laws should be lightened after a review.

"I feel that if we can have lotteries ... if we can have casinos in some tourist resorts and if the government can declare schemes of voluntary disclosure of black money, what is the harm if we legalise betting? Above all, do we have the enforcement agencies?"

Mr Sinha then said: "It is very easy to say you don't have enforcement agencies. It is like saying if you cannot stop rape, you enjoy it."

He then immediately attempted to clarify the statement - but made matters worse.

"It is better to have something, legalise it, and earn some revenue rather than throwing up your hands and letting things happen."

Girl dies after being set on fire during attempted rape

His words immediately incited a social media outcry, and women's rights groups have lashed out at his muddled statements.

Was he advocating changing laws to accommodate unstoppable behaviour? Or arguing laws should stay in place, even if there was little attempt to enforce those laws?

Politician Brinda Karat told The Hindu that it was "sickening that a man, who is in charge of several rape investigations, should use such an analogy. He should be prosecuted for degrading and insulting women."
The CBI later issued a statement on behalf of their embattled director.

"The context of the Director's remarks is important. The Director's point was only that if laws cannot be enforced, it does not mean they should not be there at all."

Director Sinha later told Hindustan Times he "was just making a point, that it is very difficult to enforce a ban on betting, that you can make a law but there are already so many and it is difficult to enforce. Lotteries are already legal. So I said betting could be legalised, it can be taxed. To make this point, I just used a proverb".
"It's a malicious propaganda, it's hitting below the belt, and it's unfair," he added.

But Ranjana Kumari, of the Centre for Social Research, was critical of both his initial statement and his response to the scanda..

"Such a senior police officer who is in a very responsible position and investigates criminal cases should not have passed such a remark," she told Hindustan Times.

"It is not acceptable and he should apologise for it. It has become a habit of people in senior positions to treat the issue of sexual assault lightly."


Absolute gutter trash that should be removed from office, never to work again in the public eye, only to be thrown into the cesspool of the 'untouchables'.

Would his tune be any different if a female member of his family was raped or even he himself?

This is the sort of scum that prevail in politics.

Australia is a host to many Indian nationals who have a not too dissimilar attitude, especially to Australian / Western women.

Many Indian males are banned from Australian night clubs in Melbourne / Sydney where the number of immigrants is high, as there have been numerous complaints regarding groping, sexual assaults against women.

This is the sort of 'trash' that the Australian politicians allow into the country.

If these people settled in the law makers suburbs and assaulted their children / women, then there most definitely would be a different policy.