So how do you go about gaining a casino licence from an increasingly dodgy government? Very carefully, no doubt. 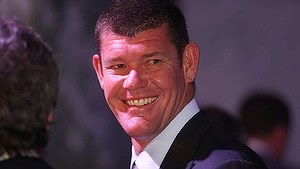 No, not New South Wales, but Sri Lanka and the Philippines, countries where James Packer’s Crown either wants to or is building a casino.

Packer officially launched his $400 million Sri Lankan ambition overnight on the eve of the Commonwealth Heads of Government meeting with a pitch similar to the story that had the NSW government in his pocket as soon as Barry O’Farrell heard it – a promise of untold wealth flowing from international tourism. In Sri Lanka, it’s supposed to be millions of rich Indians wanting to fly in to give Crown money, while Sydney has been promised squadrons of Chinese whales. The model is Macau where Chinese gamblers pour across the border, an interesting percentage of them corrupt officials laundering money in some of the city’s many casinos.

Last weekend’s Economist magazine left Packer’s name out of it while detailing Sri Lanka’s problems ahead of CHOGM, but did mention:

“In a building near the beach, a casino operator sinks into a monstrous armchair and gushes about Colombo’s gambling potential. His planned venture with an Australian investor includes a 450-room “five-star-plus” hotel to lure high-rollers from China, India and the Gulf. For now, blank-eyed tourists make do in dreary halls, playing roulette under fluorescent lights. But he, like all the ruling elite, is in a rush.”

As the Economist summarised it, since the mistake was made to hold CHOGM in Sri Lanka, the country has “drifted towards more authoritarian rule, dominated by a single family, led by Mahinda Rajapaksa, the president”. In other words, the Rajapaksa clan has turned government into a family business.

“The Rajapaksas’ ruling coalition, with a two-thirds majority in Parliament, tightens its grip,” reports the magazine. “It has pushed through constitutional changes—scrapping presidential term limits, and abolishing independent police and electoral commissions—to centralise power. Judicial restraint is weak, notably after the peremptory sacking of the country’s chief justice earlier this year.”

“Since Sri Lanka has scored below 50, it is apparent that the country is yet among those who were unable to minimise the level of corruption in the public sector,” observes Transparency.

It could be worse – it could be the Philippines languishing in 105th place on 34.

Last year Wynn Resorts cited corruption as the main reason for rejecting repeated requests from its biggest shareholder, Kazuo Okada, to form a joint venture in the Philippines. The Wynn board accused Mr Okada of making improper payments to gambling regulators in the Philippines.

“The board’s move came after an internal investigation conducted by a former FBI director found him to be “unsuitable” based on the company’s internal regulations,” reported the Wall Street Journal.

But James Packer has declared his confidence in the integrity of the Philippines gaming market. His Melco Crown arm is in a joint venture with the Philippines’ richest man to build a billion dollar casino in Manila. In July he told the Australian’s Damon Kitney:

"At the end of the day (Genting chief executive) KT Lim is up there. The Singapore government has given this a tick from a probity sense. And Singapore has the toughest probity in the world. That gives me confidence," Mr Packer told The Australian.

"And we (Melco Crown) have 100 per cent management control. We know what we are doing and we are not doing anything differently to Australia or Macau."

Kitney reported that it was understood questions from regulators about the Philippines' gaming market were one of the factors that delayed Packer's Crown clearing probity in Sydney and Brisbane earlier this year and that casinos and internet gaming were excluded from tough new anti-money laundering laws at the request of the state regulator Philippine Amusement and Gaming Corporation because of concerns it may deter foreign investors.

Last month the AFR reported that the Philippines casino was being re-branded as City of Dreams Manila.

“The new City of Dreams will include mass market and VIP gaming facilities,” said the AFR.” As a result of negotiations with PAGCOR, the complex is expected to operate 365 gaming tables, 1680 slot machines and 1680 electronic table games. This is a significant increase on the 242 tables and 1450 machines and electronic table games combined, which were previously expected to be licensed.”

smh.com.au 15 Nov 2013
Another corrupt businessman put on the pedestal by the corrupt government and police.

Packer is involved in drug distribution worth millions of dollars annually a fact that the authorities are turning a blind eye to.
These people are part of the untouchable elite with full support of corrupt politicians, law makers, and police, including the taxation department.