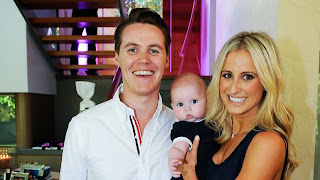 Oliver Curtis, wife Roxy Jacenko and daughter Pixie-Rose at their home in Sydney; Curtis has pleaded not guilty to the charges Source: Supplied
IT was with some regret that Oliver Curtis told his friends they would not be taking the private jet from Whistler to Las Vegas.


They would instead have to settle for a helicopter, but there was an upside: Oli (as he is known to his friends) would have more cash to shout the boys in Vegas during their North American holiday.

"Small change of heart . . . I have decided that the jet would not be as good as spreading the love over the entire trip, so here we go," Curtis wrote to a group of eight friends in September 2007.

"We now have Helijet picking us up on the 12th of Jan to transport us to Whistler. We then have the same chopper picking us up from Whistler on the 27th to take us back to Vancouver, as we will all be very hungover and not enjoy a 2 hour drive."

The trip would set each member of the group back about $10,000, but this was on top of Oli generously offering to pay their entertainment budget in Las Vegas, luxury chauffeured transport, nights at the Wynn casino and the best strip clubs Vegas could offer.

At the time Curtis was 23, as was his best mate and fellow traveller John Hartman.

Hartman told the Downing Centre local court in Sydney this week that the holiday was paid for from insider trading worth "millions of dollars" that he and Curtis were behind between 2007 and 2008.

Curtis, 27, now married to public relations queen Roxy Jacenko, pleaded not guilty to one charge of conspiracy to commit insider trading, a crime that now carries a maximum prison sentence of five years.

Turned star witness for the Australian Securities & Investments Commission, Hartman spent the week in the witness dock at Curtis's committal hearing detailing how the pair set up an account and transmitted trading information on an encrypted BlackBerry messaging system known as "pinning".

They are the children of east Sydney's elite. Curtis is the son of businessman Nick Curtis, chairman of Lynas, and Hartman is the son of Keith Hartman, the so-called "obstetrician to the stars". The two were childhood neighbours and both attended the prestigious Sydney Jesuit school St Ignatius' College, Riverview together.

They also started in finance together in 2007, as the market hit a high before the global financial crisis.
As an equities trader at brokerage firm Orion Asset Management, Hartman, at 23, earned just over $350,000, including his bonus.

Despite this, he embarked on a highly risky series of insider trades and front-running that made him at least $1.9 million.

For that crime he has already served 15 months in prison, becoming the youngest Australian convicted of insider trading when he was found guilty in 2010.

In Hartman's appeal against his initial three-year minimum sentence, the judge referred to the need to deter "21-year-old masters of the universe", a reference to the bond trader Sherman McCoy in Bonfire of the Vanities.

Perhaps a more contemporary comparison for Hartman's and Curtis's lifestyle would be the forthcoming Martin Scorsese adaptation of the story of Jordan Belfort in The Wolf of Wall Street.

At one stage, Belfort, played by Leonardo DiCaprio, tells the viewer "we were making more money than we knew what to do with".

When asked how much the pair allegedly made in just one year of their inside trading, Hartman was similarly unsure.

"To begin with, tens of thousands, then into hundreds of thousands. In one year, I could not give you an exact figure, but millions of dollars," Hartman told the court.

He claimed that over a drink Curtis once told him that "there was no easier money in the world being made than this".

The plan was easy enough.

Hartman said he would send Curtis the stocks that Orion intended to trade in via the BlackBerry PIN system. Curtis would then notify him with an "OK, will do" when he had placed the trades in their account.

"I would wait for Oli to tell me that he had finished placing the trade . . . Once I got that I would begin trading for Orion."

So as not to arouse suspicion, Hartman alleges that Curtis paid him his share through gifts.

Emails between the pair show discussions about a $60,000 Mini Cooper S that Hartman wanted.

"Yea agreed, we will go and order this weekend," Hartman wrote in June 2007, the court heard.

Not long after, a payment was made for $60,000 into Hartman's bank account from Encounter Investments, a company ASIC alleges was set up by Curtis to hold the earnings from their trades.

As well as a Ducati motorcycle and the North American holiday, Curtis provided a $3000-a-week apartment on Bondi Beach that Hartman lived in rent-free with Oli and his girlfriend.

The two partied hard, with Hartman regularly spending more than $1500 in a night at East Sydney bars such as the Golden Sheaf and Four in Hand.

Drugs and gambling were also ever-present, with exchanges revealed between Hartman and his elder brother Edward Hartman discussing the fixing of Group I horse races and buying cocaine.

Edward Hartman is now in New York as an executive director with investment bank UBS, but was then a UBS trader in Sydney and an amateur jockey with significant racing connections.

In an effort to discredit John Hartman as a witness, Curtis's defence team released emails gathered by ASIC showing the pair planned to fix a horse race through a Betfair account and to bribe "a very high-profile jockey".


They are the one of the few that have been 'caught', whereas the industry is littered with this type of criminal.

The Australian court system is quite literally a joke.

Corporate fraud and crime in Australia DOES pay and it pays well, on the proviso that you have the support of the system and of course the 'brotherhood'.

Another company involved in insider trading is ABN Amro.