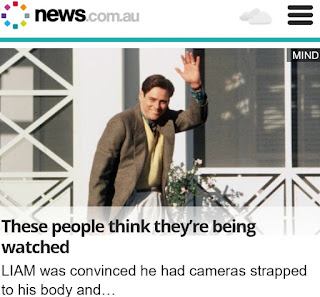 So it looks like the corporate media are on a government propaganda binge where anything outside of sanitised information  is a 'conspiracy theory' or even a character assassination on you where you're a tin foil hat wearer or nut case.

On the topic of surveillance, according to the mainstream media mutts, you've got some sort of newly classified (keeping psychiatrists in the job) e-Personality disorder.

So, according to bbc.com there were approximately  4 - 6 million CCTV cameras in 2015, in the United Kingdom alone.

The Australian government has been keeping all your (meta)data for a period of time, where it has been doing this since day dot, but only now it's been enshrined in statute law.

The Snowden leaks have exposed government policy of global mass surveillance, literally unfathomable to the layperson.

Every person's smartphone has data harvested  from it, unbeknown to the user.

Smart air conditioners are now supported by government so that the electricity companies can switch off your appliance whenever it suits them under whatever pretext, e.g. not enough electricity supply.

It has been confirmed that Samsung's Smart TVs 'listen in' to you in the privacy of your own home.


So when one talks about "they're watching us" is that really paranoia or just being a realist?