The people in government protect their brethren (or brethren's wives) by not informing their tax slave population of any criminal activities they have committed even though the public have a right to know meaning it is in the 'public interest'.

Victoria Police is an organisation that covers up criminal activities committed by people in government or their relatives.

Those who you see to have had action taken against them are there for show, so that others will be obedient.

This is just one example that has made it out into the public arena where Victoria Police has acted dishonestly, against their duties, protecting and covering up a drink driver the Premier Daniel Andrews' wife, Catherine Andrews. 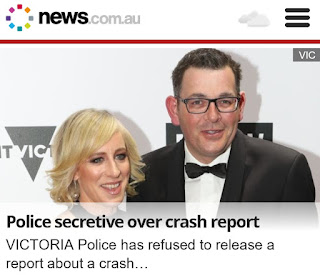 It sure does pay to be in the 'brotherhood', but then you have to give back a percentage once you keel over.

VICTORIA Police has refused to release documents detailing an investigation into a collision involving Premier Daniel Andrews’ wife, claiming a freedom of information request was not in the public interest.


Victorian Premier Daniel Andrews with his wife Catherine Andrews. Picture: AAPSource:AAP
VICTORIA Police has refused to release documents detailing an investigation into a collision involving Premier Daniel Andrews’ wife, claiming a freedom of information request was not in the public interest.

It comes after revelations by Channel 9 News that an internal review into officers who did not perform a breath test on Catherine Andrews ended with the two police officers being let off with a warning.

The father of the 15-year-old cyclist injured in the crash confirmed to the Herald Sun that he was still waiting to hear from the Premier and his wife more than four years later.

Mrs Andrews was at the wheel of a taxpayer-funded car in Blairgowrie when it collided with the teenage boy on about 1.30pm on January 7, 2013.

The boy was taken to the Royal Children’s Hospital, where he underwent surgery to stem internal bleeding, also suffering a punctured lung, broken ribs and cuts.

Victoria Police officers arriving at the scene did not follow standard procedure and failed to breathalyse the then Opposition Leader’s wife and an internal investigation was launched.

But four years on, Victoria Police has denied Freedom of Information requests by Channel 9 into the details of the crash and into the internal investigation of the officers.

Both requests were rejected on grounds that they were not in the public interest.

In total, 38 pages of notes were requested including three pages of the car Mrs Andrews was driving at the time, two pages of witness statements and a two-page statement from Mrs Andrews.

Victoria Police said in a statement that the Professional Standards Command had finished their investigation into two members failing to follow policy.

“The two attending member failed to conduct a PBT on the driver of the vehicle involved in the collision.

“Both members were administered Workplace Guidance and the matter has been finalised.”
Mr Andrews said the crash was a deeply traumatic event for all involved and wished the father and his son all the best.