14-year-old on wheel rims during chase 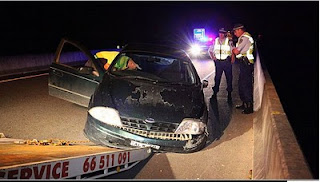 A 14-YEAR-old allegedly led police on a 30-minute driving rampage in NSW before two truckies helped apprehend him.

The truckies blocked both lanes of the Pacific Highway near Coffs Harbour last night, slowing traffic and causing a makeshift roadblock to cut off the boy's escape.

One then crash-tackled him as he allegedly tried to sprint from the scene on foot before police arrived.

He allegedly drove some distance on the highway with just three wheels, AAP reports.

Police first noticed the boy on the highway near Nana Glen at about 6pm, but when they signalled him to pull over in an allegedly stolen vehicle, he allegedly accelerated.

Detective Inspector Chris Clarke said the boy crashed into two cars in the town's CBD - including a learner driver - but didn't stop.

The teenager then allegedly lost control of the car and side swiped a Holden car which was stationary at the time.

The 28-year-old female driver of the Holden was taken to Coffs Harbour Hospital with a suspected fractured back and remains in a stable condition, according to AAP.

For most of the pursuit, he was driving on wheel rims only.

Twice, police had to call off the pursuit over safety concerns.

"The vehicle was damaged and he presented a danger to himself and members of the public," Det Insp Clarke said.

But, with the pursuit moving back to the highway, the truckies acted.

"They took it upon themselves to cause a road block because they feared that he would cause serious injury or death," Det Clarke said.

The pair slowed down traffic in both lanes, leaving no room for him to move and he could not overtake because of a concrete median strip.

He was charged with police pursuit under Skye's Law, negligent driving and taking a car.

He was granted bail to appear before Coffs Harbour Children's Court on December 2.

It might be a good idea for the mass media to say that it was speed that was responsible for the accident, in a goverment sponsored revenue raising exercise to lower the speed limit for 'the safety' of the public.