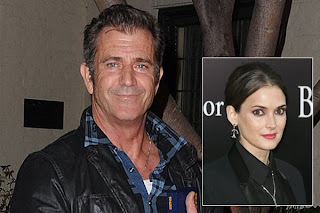 Before he started swearing at female police officers and punching his baby mama's teeth out, everyone thought Mel Gibson was a pretty nice guy. But Winona Ryder always knew better.

The Jewish actress has recalled her shock at Mel Gibson once calling her an 'oven dodger' at a party and making a homophobic slur against her friend.

The 39-year-old Black Swan star says Mel's increasingly offensive behaviour over the last few years makes her feel vindicated as no one previously believed he would have said such horrible things to her.

"I remember, like, fifteen years ago, I was at one of those big Hollywood parties. And he was really drunk," Winona tells GQ magazine.

"I was with my friend, who is gay. He [Gibson] made a really horrible gay joke. And somehow it came up that I was Jewish. He said something about 'oven dodgers,' but I didn't get it. I had never heard that before.

Winona later realised the term was an offensive reference to the mass killing of Jews in gas chambers and incinerators during the Holocaust.

"It was this weird, weird moment,” she added. "I was like, 'He's anti-Semitic and he's homophobic.' No one believed me!"

CorpAu posted comments on the site which were NOT published.

What about the others?

During World War II, many other religions / nationalities died.
20 Million Russians alone, then there's the Poles (12 Million were displaced), where the slaughter yard happened, and Germans as well, JUST to name a few.

The mass media deliberately propagates 1/2 truths, supporting misinformation, or any other agenda of the day.