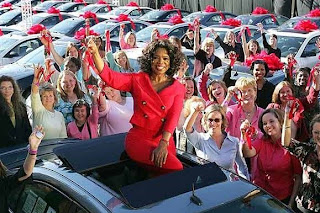 Not exactly new news, as this event occurred in 2004, but none the less an indication of how fraudulent the mass media can be in shaping the minds of the masses.

On her show the crowd went wild, with excitement.

The mass media over amplified this story that she is some sort of God sent philanthropist.

The cars given away were 'sponsored' (donated) by Pontiac.

What Oprah also failed to mention that there would be a tax involved with the ownership of the car.

The only options were:

Many of the audience members could not afford to pay the tax.

The audience have been duped at the time of the announcement that they are receiving a free car.

Oprah recently visited Australia, in a mass media campaign, that portrayed her of divine like status akin to Mother Teresa.