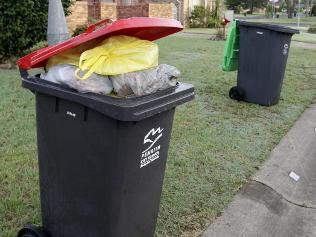 FOOD could be banned from NSW household rubbish bins or residents might be charged extra to remove it under proposals to deal with the state's growing mountains of garbage.

A "scrap tax" for the collection of food items from households is one recommendation under a radical plan to address our wasteful ways.

Under proposals before the State Government, all food would be either banned from bins or residents would be forced to pay to throw it out.

It comes after a review found a third of household garbage was food that could be composted rather than rotting in land fill.

If the plan was put in place, Sydney could see the rise of lockable bins to stop neighbours filling them up at night, similar to procedures in Europe where rubbish is paid for by weight.

The NSW Waste Strategy and Policy Steering Committee Review found residents of just 15 councils generated 37 per cent of domestic waste in the entire state. Blacktown, Sutherland, Wollongong, Lake Macquarie, Wyong, Gosford, Fairfield, Bankstown, Penrith and The Hills made the top 10 list of most wasteful council areas, generating between 80,000 and 120,000 tonnes each a year.

Householders currently pay a levy in their council rates for garbage collection, regardless of how much rubbish they generate. But the scrap tax would force residents to pay for food they throw away because the existing levy, a $385 million money-spinner for NSW Treasury, does not encourage people to recycle, the review said.

It found the current levy had "no effect" on recycling but warned the scrap tax could lead people to use their neighbours' bins to escape the cost.

"That would impact most directly on ratepayers in council areas that do not take action and there may be demographic factors that influence the ability of some councils to take action."

It admitted a scrap tax would be difficult to enforce, could be rorted and would result in much bigger bills.

Environment Minister Frank Sartor said the review and response documents were released for public comment, following consultation with waste industry and councils. "A continued increase in waste generation is likely to occur as a result of population growth and economic activity," Mr Sartor said.

No matter how governments are glossing it over, they are forcing the public to bare the costs of FAILED government infrastructure.

The government has FAILED to provide enough water to the public, so the onus has been put on households to buy expensive water tanks, which once connected, the water rate rises for the household, which they were NOT told about before.

All household water tanks must be registered with the government.

New taxes are thought of all the time BUT the ones that come out are the ones the political think tank has thought the public will accept.

Governments town planners, staff from the Deportment of Infrastructure are responsible for providing the public with facilities needed associated with NATURAL population growth.

A DELIBERATE attempt at putting people in POVERTY.