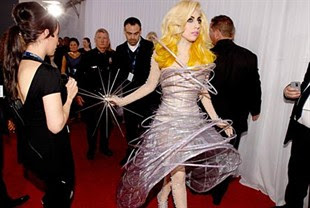 Out-there (???) pop star Lady Gaga has surprised fans at one of her London shows by biting the head off a Santa Claus doll during an impromptu foul-mouthed rant against Christmas.

The 24-year-old singer was midway through her show in front of 10,000 people at the O2 Arena on Friday night when a fan threw the red and white doll onstage.

Gaga picked up the toy and told the crowd: "I do like Christmas but for those of you who are feeling lonely this Christmas, just to keep everyone happy..."

She then sunk her teeth into the toy's neck, ripped its head off and threw it on the ground before stomping it with her heels.

"I hate the holidays. I'm alone and miserable you f---ing stuffed little toy," she yelled, as the crowd laughed.

"He was pregnant with chemicals not meant for children."

Gaga threw the doll's remains back into the crowd before saying: "Anyway, now that I've killed Santa, what am I going to do with you all."

The Poker Face star was met with applause throughout the stunt.

If such a similar slur was made against the Islamic faith or the Jewish faith, a world wide uproar would be publicised to have her beheaded or economically sanctioned for life.

Entertainment Trash such as Germanotta, are puppets of the Hollywood financiers.

One of the worldwide trends is to destroy the Christian faith, whilst promoting others vigorously.

terms are often heard in the mass media, BUT NEVER