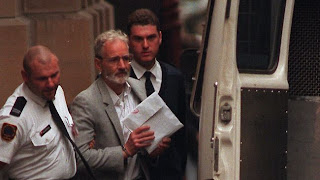 AN evil child killer is running a depraved sex ring from inside one of Victoria's jails.

The source claims Lowe, aided by a notorious police shooter, is using a prison sex program run out of the prison's Children's Visit Centre to groom young prisoners to be paedophiles.

"He's been the chairman of these sessions," the prison source told the Herald Sun. "He's using the program to groom young, mentally ill inmates, and turning them into sick monsters like himself."

Sheree Beasley was riding her bike from local shops to her home in Rosebud on June 29, 1991, when Lowe lured her to a merciless death.

People Against Lenient Sentencing spokesman Steve Medcraft said Lowe should be immediately moved back to a tougher prison. "How you can have a child killer at Ararat is beyond me. They should be in a hardened cell at Port Phillip or Barwon," he said.

The S.H.A.R.E prison program - developed after repeated requests by inmates for a support program for gay prisoners - openly promotes sex between inmates, stating: "It's just jail sex, you're not gay (unless you kiss)". The depraved ring includes career rapists, including a man who raped a woman only moments after walking from court on sex offences.

"Most of these guys they're preying on shouldn't even be there, they're mentally ill," the source said. "These guys are taking them in, getting them in debt then moving them on to the USBs ... before long they've dumped their wives or girlfriends and are living with these sickos."

Corrections Victoria defended the program, explaining that it was "one of a number of programs aimed at supporting prisoners and assisting with their re-integration back into society".

The source, who now fears for his life, claims to have seen Lowe and other sex fiends watching child pornography on prison computers.

The contraband is allegedly smuggled into prison by visitors or picked up from secure locations while inmates are working outside prison walls.

Corrections Victoria said prison staff carried out regular searches of prisoners and their cells as well as regular audits of computer equipment used by prisoners to ensure they did not view contraband. It said prison staff supervised all program sessions.

As stated in the article, the story made light due to a:

Corruption in the prison system is the norm. It is common practice, to offer bribes to guards in return for favours.

This is done in full knowledge of the government.

The government allowed access to child pornography by the prisoners.

With computer technology today, authorities can have access to any item on your PC in real time.

Within hours of publication of US War documents on Wikileaks, governments shut down access to the website.