Hamish Blake and Andy Lee hit the jackpot with Channel 9 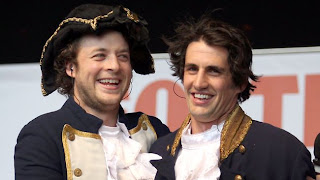 RADIO kings Hamish Blake and Andy Lee are set to sign a production and performance deal worth as much as $15 million with Channel 9.

The clever comedy duo are understood to be close to a two-year-deal to produce a minimum of 10 hours of TV per year for the network through their production company Radio Karate.

Joining forces with Nine would also allow them to tap into the network's major events coverage, including the London Olympics next year.

The big budget deal, following an intense bidding war between networks, cements their place as two of the most powerful and highest paid stars on Australian TV.

Interest in the undisputed champions of the airwaves has been enormous, with all networks making lucrative multi-million-dollar bids over the past six months to entice them to their stables.

But Nine has won out, with the proposed deal leaving the pair plenty of scope to investigate opportunities overseas, as well as giving them time for their Australian radio commitments.

Lee and Blake dominated the airwaves for Austereo as the champions of the afternoon drive shift for the past five years.

They have scaled back their commitments to one show a week on Fox FM this year.

Two people depicting morons are the "KINGS of RADIO" according to the mass media.

This is typical of the politics of the 'entertainment industry' in promoting cretins to elevated an status. This is done as they offer no real significant value, but show moronic behaviour, and stunts that are dangerous to the victim as well as their well being.

The impressionable youth have morons like this as role models, which is the policy of the 'industry' to dumb down the nations youth.

Talking about flatulence and when was the last time you used breast milk for your guests is HIGH QUALITY entertainment.