Tony Abbott's hand-picked auditor charged with assessing government spending and advising on outsourcing runs a company that has won contracts from the federal government worth more than half a billion dollars. 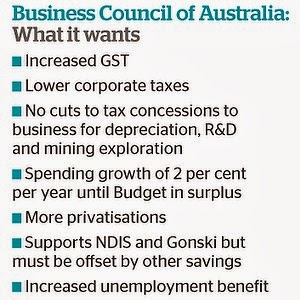 The opposition has accused the government of stacking its Commission of Audit with big-business representatives and ideological fellow travellers.

Business Council of Australia chairman Tony Shepherd will lead the commission while the lobby group's chief economist and director of policy, Peter Crone, will head its secretariat.

The commission is to recommend sweeping, long-term reforms to the budget to ensure it moves into surplus in the medium term, including examining potential spending cuts and the privatisation of government assets.

Mr Shepherd is chairman of Transfield Services, a construction and services firm that has won a string of contracts in recent years worth hundreds of millions of dollars. These include the contract for maintenance and support services at the Nauru detention centre worth $184.3 million.

Mr Shepherd is understood to be leaving his Transfield position at the end of this week.

Also listed on the Austender website are Transfield contracts with the Defence Department worth more than $400 million.

Asked on Tuesday whether there was a conflict of interest in appointing Mr Shepherd to oversee a process that could see substantial government functions outsourced to the private sector, Mr Hockey said: ''We don't apologise for appointing the best team to eliminate government waste.''

The BCA, which represents Australia's top 100 companies, has advocated an increase in the GST but wants a large cut to the corporate tax rate while railing against any reduction in what has been dubbed ''business welfare'', including tax concessions for depreciation, research and development and mining exploration.

Opposition Leader Bill Shorten said: ''It is truly extraordinary that the Liberals have outsourced their policymaking to big-business lobby groups. These are the business groups who have publicly called for an increase in the GST, reducing penalty rates and the minimum wage.''

The BCA has been calling for a commission of audit for years to fix structural problems in the budget.
Economists, community groups and budget experts contacted by Fairfax Media welcomed the audit as long overdue but there was some disquiet about the heavy presence of the BCA.

Richard Denniss, the executive director of the left-leaning Australia Institute, said the BCA had been a close ally of the Coalition when it was in opposition, opposing the carbon and mining taxes and supporting the ''greatly exaggerated'' contention that Australia had a significant debt problem.

Dr Denniss said he was concerned about the influence of the BCA on the commission's views on the ideal level of overall taxation and therefore the amount of money available for social services.

The Australian Council of Social Service welcomed Mr Shepherd's appointment but said ''the absence of a community representative from civil society means it will be vital that the commissioners work closely with the community sector''.

Small-business leader Peter Strong also praised Mr Shepherd but said he would watch closely to ensure that any flagged privatisation did not favour big business or increase its power over smaller operators, especially when it came to Australia Post.

Another commission member is former federal public servant Peter Boxall, who oversaw the introduction of WorkChoices during the Howard government.


More corrupt deals from the heads of government.

Privitisation allows the 'brethren' to set up companies that fraudulently win contracts, to the financial detriment of tax payers.

Another fraud worth $500 million, brought to you by the 'government' ( read corporation).
Posted by AuCorp at 8:52 AM