Smart meters, but at whose expense? 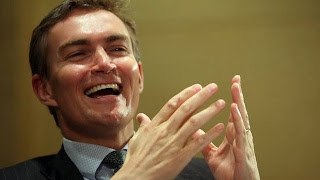 THE introduction of smart meters in Victoria may have been a costly exercise for consumers but it has proven an impressive money spinner for a handful of Australian entrepreneurs.

Cameron O'Reilly (illustrated, CA$HING IN), the scion of the Heinz food empire and former chief of media group APN, along with John B. Fairfax, the Smorgon family and Kerry Stokes are a few of the high-profile names to have made a killing from the sale of smart meters (of the general populous to spread cancer?). They were major shareholders of Landis + Gyr, the company that amassed about 56 per cent of the market in deals to supply the electricity distributors in Victoria.

Their big payday came in 2011 when O'Reilly sold Landis + Gyr to Toshiba for $US2.3 billion.


An investigation by BusinessDay has found Australians have been paying about twice the amount for smart meters than consumers in the US and Europe. And there has been poor transparency even though the metering devices had been mandated by the government.

That the costs of the implementation in Victoria have already blown out from $800 million to $2.3 billion presents a salutary warning to New South Wales, which is now deliberating on a rollout of its own, albeit optional.

The success of Landis + Gyr has confirmed Cameron O'Reilly as one of the most savvy businessmen in Australia. The O'Reilly family had controlled regional media group APN and just as the fortunes of old media were about to take a battering last decade, O'Reilly was already moving deftly into a new space.

He started with Bayard Capital in 2002, garnering seed money from friends and business acquaintances. Kerry Stokes and J.B. Fairfax pitched in $20 million apiece, and the Smorgon family another $5 million. O'Reilly soon sold two-thirds of his APN shares and chipped in a further $5 million.

He raised $100 million in seed capital, then Bayard went on a $1.5 billion spending spree, acquiring Swiss metering company and industry leader Landis + Gyr. The Toshiba sale for $2.3 billion made Bayard's seed investors a handsome multiple of their investment, although it is only possible to piece together estimates of profits from the public materials.

The Fairfax family would make about $203 million, through Marinya Holdings, and the Smorgon family's Escor Investments, $36 million.

John Curtis, the chairman of St George Bank made $24 million and the private equity group Propel Investments about $405 million.

Propel and Curtis came on board through a series of capital raisings before the Toshiba sale. Other shareholders in Bayard were Temasek Holdings, the investment arm of the Singapore government, the former Lion Nathan chairman Doug Myers and fashion designer Carla Zampatti. Once O'Reilly had acquired Email Metering, the Enermet Group of Finland, Hunt Technologies and Cellnet Technologies in the US, and Europe's Landis + Gyr, Bayard was the No. 1 player in the world market.

Not only did Landis + Gyr, to which Bayard then changed its name, dominate Victoria but it also managed to fetch high prices for its devices, perhaps the highest in the world. Repeated efforts by BusinessDay to find relevant information about smart meter prices and contracts have fallen on deaf ears. ''Commercial in confidence'' has been the response. Both government agencies and distributors refused to provide details, although industry sources said Australians have been charged twice as much as customers in other developed markets.

According to eMeter Corporation, a meter data intelligence department of Siemens, the average cost of smart meters sold to utility companies in the US is $221, and in Europe $272. A spokesperson for the Australian Energy Regulator (AER) confirmed the Victorian distribution companies paid an average of $346 to their suppliers. Powercor paid the highest at $423.

Landis + Gyr meters are widely used across the US and Europe. It is the sole supplier of the E350 model to SP AusNet and has a contract to supply 80 per cent of CitiPower and Powercor's E350 smart meters. A spokesman for CitiPower and Powercor said that there were at least 32 respondents to the tenders. It was a ''highly competitive process'' with 16 detailed proposals lodged, according to CitiPower and Powercor. Landis + Gyr's PR company said the prices negotiated in Victoria could not be compared with those overseas as specifications changed from country to country.

''The Landis + Gyr smart meters sold in Victoria are manufactured in Australia to meet the custom specifications of local utilities,'' he said. ''The model numbers we use, in this case the E350, specify a generic nomenclature within Landis + Gyr globally, however, between each region, the form factor, functionality, communications type, network provider and feature set vary widely, meaning the same model number meters are not the same regional devices at all.''

Although Landis + Gyr could hardly be expected to divulge commercial information, the government should disclose. The public is footing the bill, after all. Yet there was no response from the AER, or the distributors.

The other major supplier of smart meters in Victoria is Secure Meters previously known as PRI Australasia. Secure Meters supplies the i-Credit 500 model. It is headquartered in India.

The high price of a meter in Victoria and the paucity of proper information about their cost serves as a warning to consumers in NSW. Last month, the O'Farrell government announced plans for a market-led rollout of smart meters for NSW. One distributor, Essential Energy, said it had been reviewing Landis + Gyr and Secure Meters as potential suppliers.

As crunch time approaches for weary power consumers in NSW, the state would do well to deliver a more transparent outcome - and a lower price, seeing it is the customer who has to pick up the cost while the greater benefits, according to most independent observers, fall to the distributors rather than the customers.

Another 'Money for Mates' deal at the expense of the general populous.

Made in India for $4, and sold to Aussie 'sheeple' for hundreds (per year).

Another corporate scam supported by the government fraudsters.
The untouchable Anglo-Masonic elite.
Posted by AuCorp at 8:43 PM