In Victoria Australia, the government has apparently ‘mandated’ the installation of ‘smart meters’ to all residential (households) and small business (not large or corporate) customers.

There are several issues raised by people as listed below, but not limited to:

In Melbourne, Australia the electricity distributor Powercor has been caught out providing false information to consumers regarding its smart meters.

Apparently under Australian law, providing false or misleading information to consumers  is ‘illegal’ and carries a fine. 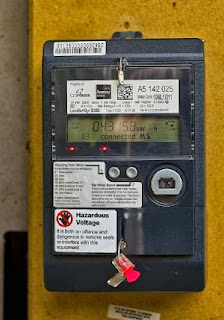 The smart meter that Powercor installs into households is manufactured by Landis+Gyr in Zug Switzerland, a multinational corporation with 45 companies in over 30 countries.

1). The radiation is a very small amount, the same as a short mobile phone conversation or SMS (Short Message Service),

3). The meter relays information back to base 4 times per day,

4). A reassessment that the radiation level now (within approx 1min of previous statement) of the smart meter is now ½ the strength of an SMS,

5). Well within the Australian Standards,

6). Meter next to head not a concern,

7). Powercor is acting on behalf of DPI to install meters,

The video is titled: Powercore Smart Meter Spikes off Scale!

In the test environment shown in the video,

The smart meter emits approximately 46.8 times more radiation at a greater distance than the mobile phone in the test.

This shows clearly that Powercor has provided false information in relation to EMF emissions.

Powercore states that the meter transmits 4 times per day, whereas it actually transmits once per minute which equals 1440 times per day. Another false statement made by Powercor.

Item 4). above states that Powercor reassessed SMS emissions of mobile phones and now their meter emits  ½ that of an SMS. Actual results show that if an SMS as shown in the video has a peak of 39mW/m2, then the smart meter would have an emission of approx. 20mW/m2.

The test shows that the claim by Powercor to item 4). is not only false but inaccurate by a factor of 91.3 times.

Item 5). Above states that Powercor’s meter is within the Australian Standard, can such a test result be produced?

Can Powercor provide a MSDS (Material Safety Data Sheet) for the device?

In relation to Item 6). Can information be provided to the consumer with test results of brain tissue degradation close to smart meter?

Item 7). States that a binding contract is in place with the DPI (Department of Primary Industries) to carry out installations of smart meters. There is NO stated or implied agreement for Powercor to carry out any claims of consumer health effects.

Does Powercor hold scientific papers that undeniably conclude that there is no evidence that mobile phones are linked to brain cancer?

Powercore also states that given that the alleged public opinion is of ‘no concern’ given the fact that they are using mobile phones on a daily basis is enough to conclude that mobile phone use does not cause brain cancer.