JULIAN Assange's mum fears the WikiLeaks founder could develop serious health problems if he continues his lockdown in the Ecuadorean embassy in London. 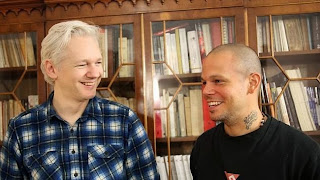 And Christine Assange has also hit out at a new Hollywood blockbuster about her son, claiming it falsely suggested he dyes his hair white.

Ms Assange, who lives on the Gold Coast, said the health risks from a lack of sunlight were well documented and her concerns for her son were increasing as he approaches 500 days in the embassy.
"As his mother, I'm concerned about his health. Everyone who cares about Julian worries about what this is doing to him," Ms Assange said.

"He and the Ecuadorean embassy are doing the best they can under these terrible circumstances -but no one can overcome the fact that the human body needs sunshine."

She said a lack of vitamin D from the sun would depress her son's immune system and "increase the risk of osteoporosis, diabetes, heart failure, stroke, cancer, multiple sclerosis and depression".

"The reason prisoners are given access to an hour of sunshine each day is because it is a medical fact that the body needs direct sunlight to activate its metabolic processes," she said.
Mr Assange has been granted political asylum in Ecuador but is prevented from leaving the United Kingdom by British authorities who threaten to arrest him if he leaves the embassy.
He was granted asylum in a last-ditch effort to fight being extradited to Sweden to face allegations of sexual assault.
"The way to break this is very simple," said Ms Assange, who called on authorities in the UK to demand Swedish investigators interview her son in England immediately and either charge him or drop the case, "as he and his lawyers have constantly requested".

fears being deported to Sweden will result in him being handed over to the United States for his role in the publication of thousands of classified government documents.

Events surrounding the massive 2010 data release are portrayed in a new movie, The Fifth Estate, which Ms Assange said repeated two crucial factual inaccuracies that Julian dyed his hair white and was part of a cult as a child.

"I did discuss it with Julian when he was a teenager that someone had mentioned that his brother's father may have been involved with a cult, but it was a speculative comment and it was never proven.

"I was concerned (about it at the time) but it was never proven. And
now it's been blown out of all proportion and sensationalised to sell movies and promote articles."

She said her son's hair colour was the result of Irish genes, which were responsible for early-onset grey hair, including "my own stepmother-in-law, who was of Irish descent and went grey at 24".

"When people put inaccuracies into movies and articles about people who are currently living ... it's a form of smearing. And that person then has to live in their world with those inaccuracies about them and their family," Ms Assange said.


A common method employed by the 'powers' is that if we don't get you one way, we WILL get you another way.

Hollywood is based on deception, falsified names, and a propaganda perpetuating machine.

Many so called Hollywood produced 'documentaries' do not tell the story how it actually was, but falsify the depicted events to promote the agenda.

This is particularly of many war 'documentaries', or sensationalised dictator biographies.

The purpose being that of misinformation and/or discrediting.
Posted by AuCorp at 11:33 AM