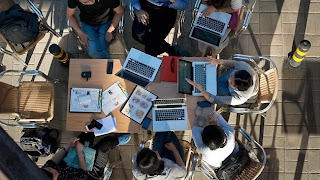 The monitors, called “internet opinion analysts”, are paid by the government and businesses, the BBC reports, citing The Beijing News.

Instead, their job is to "strictly gather and analyse public opinions on microblog sites and compile reports for decision makers", The Beijing News reports.

The millions of monitors are thought to be part of China’s massive, secretive army used by the Communist government to control the internet and stamp out dissent. They search through personal blogs, social media posts and discussion boards to gauge public attitudes. They also monitor foreign websites.

The South China Morning Post reports the online monitors also use their research to investigate local corruption claims. China's government also uses the monitors to gather public opinion on high-profile crimes or scandals and then uses the information to shape their response, the International Business Times reports.

Describing a typical workday of online monitor Tan Xiaotoa, the newspaper says: "He sits in front of a PC every day, and opening an application, he types in key words which are specified by clients." The building housing Unit 61398 of the Peoples Liberation Army on the outskirts of Shanghai, believed to be the home base of China's cyberattacks on the US. Picture: AP
"He then monitors negative opinions related to the clients, and gathers and complies reports and sends them to clients."

China's government has some of the strictest web controls in the world. Websites that are considered to be subversive are blocked, but the popularity of social networks has made it harder for China to stamp out criticism online.
The Beijing News admits it is impossible for the government to delete every "undesirable" post from the internet.

The popular Sina Weibo microbloggin site has more than 500 million users who post around 100 million messages a day - including posts criticising the government or rallying against problems within Chinese society.

The government's propaganda department previously employed people to write positive online posts in response to negative chatter online, and to smear the reputations of government critics or to harass them online, the IBT reports.

The Australian government does exactly the same thing, but information is scarce about this, and is rarely talked or written about by the corporate media.