THINK the NSA spying is a new phenomenon? Think again. 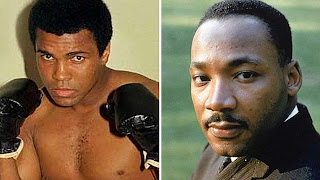 The US law enforcement agency has been tapping phone calls for decades and newly declassified documents show that both Martin Luther King Jr and Muhammad Ali were NSA targets between 1967 and 1973, according to the Washington Post.

The civil rights leader and boxing great reportedly became targets after they spoke out against the Vietnam War.

US Senator Frank Church - who was actually a vocal supporter of the war - New York Times columnist Tom Wicker and Washington Post humorist Art Buchwald were also spied on and had their phone conversations recorded according to the documents.

An NSA lawyer told The Washington Post that the NSA "seemed to understand that the operation was disreputable if not outright illegal".

But the spying was reportedly justified because "the country appeared to be going up in flames" - the NSA internal history noted.

President Lyndon Johnson was using the program to try to find out if the anti-war movement was "receiving help from abroad".

Ali, King, Wicker, Buchwald and Church were just a handful of people in a list of 1600 targets who had all of their communications intercepted by the NSA for allegedly helping to stoke the anti-war movement.
Intelligence historian Matthew M Aid said he had "no idea" why journalists were targeted.

"Since when did journalists become legitimate intelligence targets," he said.

The news comes just months after whistleblower Edward Snowden revealed that the NSA had been collaborating with corporations such as Google, Microsoft and Facebook to spy on people's online activity in a program dubbed "PRISM".


In Australia, every person's online activity is monitored and collected, and available instantly.

The "PRISM" program is often referred to colloquially as 'prison' as the words have a similar sound when pronounced quickly or not clearly.

According to the (United States) state the people are its greatest enemy.