The operator of the City Link tollway has the protection of an act of parliament whereby the Police Force collect fines for toll evasion and pass the unpaid toll onto Transurban. Legal opinion on the matter suggests this is blurring the line between civil and criminal law. 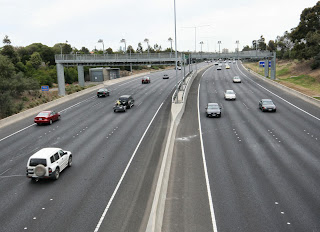 HAMISH FITZSIMMONS: Because if you don't use the electronic tolling system to drive on Melbourne's new City Link freeway and don't pay the fine for avoiding the toll, you do the time.

Borne of an arrangement between the Kennett government and City Link's builders, Transurban, the Melbourne City Link Act means the Victoria Police collect unpaid tolls for nothing.

City Link is the only private company to use this system, called the Penalty of Enforcement by Registration of Infringement Notice, or PERIN system.

Jenny COOTES: The police collect it. Well, the state actually recovers the fine, and from that fine that the state recovers, Transurban gets a nominal toll and a nominal administration fee.

HAMISH FITZSIMMONS: Some people are claiming that they can be thrown into jail on the basis of this. Is that right?

Jenny COOTES: This system works exactly the same as any other enforcement system. From our perspective the enforcement is the deterrent.

HAMISH FITZSIMMONS: But legal opinion on the matter suggests the Act is a little too cosy an arrangement. Gary Sullivan from the Federation of Community Legal Centres is part of a panel which looks at the use of the PERIN system. He says Transurban's use of the system blurs the line between civil and criminal law.

GARY SULLIVAN: If a person drives along these tollways and hasn't got an e-TAG and is fined, they ultimately face a jail term for that. And the ironies are that Transurban is in fact a private company using our criminal legal system.

HAMISH FITZSIMMONS: And what would you like to see done about the matter?

GARY SULLIVAN: I think it's an appalling situation. I find it unbelievable that a government could allow - could allow this to occur. It's a mockery of the division between civil and criminal law.

HAMISH FITZSIMMONS: The State Government hasn't been available for comment yet, but it's said to be considering the matter.

COMPERE: Hamish Fitzsimmons reporting.
abc.net.au 27 Jan 2000
This is an example of how  'corporate laws' are designed to enslave the masses and make 'criminals' out of them.
Posted by AuCorp at 10:44 PM