What better way to entertain the masses than through the so called 'entertainment' industry.

What better tool to use than the corporate media.

Apparently, when we (Australians) were sleeping, in the United States some teenagers stole a performer's (read entertainment industry puppet) underwear.

This is very ground breaking news which is extremely important, probably to the children of the canon fodder with very low I.Q's. 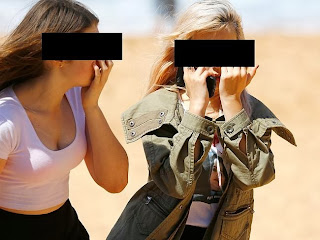 The so called teenage pop stars are manufactured and cleverly marketed by the ruthless entertainment industry moguls, for exorbitant profits.

The most common way to lure the next tool is to mention how much money they can make, totally omitting the fact that the company will be making at the least 10 times the amount given to the artist.

A picture of the two teenage girls in question usually helps.......