A family-run café in Germany has won a dispute with corporate superpower Apple Inc. The multinational took legal action against the café, Apfelkind, for copyright infringement, claiming the logo was too similar to the company’s trademark apple graphic. 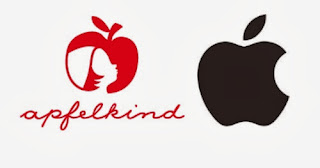 Apple Inc. withdrew their appeal from the German Patent and Trademark Office after a 2-year-long legal battle. Apple gave no explanation for its decision for dropping the case against the family café.

The multinational claimed that the Apfelkind café’s owner had committed an infringement of copyright with their logo - a red apple with the silhouette of a girl’s face in the center.

Apfelkind’s owner, Christin Romer, filed a patent application for the logo after opening the café in May 2011. Four months later she received a letter from Apple, alleging that Romer had committed copyright infringement.

"It was just 4 months after I opened the cafe when I got the letter from Apple informing me that they [had] lodged a complaint against my brand," Romer told RT’s video agency Ruptly.

When Romer refused to withdraw the patent application, Apple began drawing up a settlement agreement whereby Romer would not use the logo on any electronic items nor would she talk about it.

"It's great that so many people provided me with their support, saying that the logos are not similar to each other. They were all saying - "keep up, Christine, Apple only wants to make you small,” Romer told Ruptly. Now Romer is free to use the design where she pleases, but given that the case is not formally closed, Apple could file charges against the café again.

This is not the first time that Apple has threatened legal action for copyrighting its logo. Back in 2008 the multinational said it would press charges against New York City for its GreeNYC campaign logo.

“[GreeNYC’s logo] so closely resembles Apple’s [logo] that its use is likely to cause confusion, mistake or deception in the minds of consumers," wrote Apple Computer’s lawyers in 2008. They argued that use of the GreenNYC logo would “likely cause dilution of the distinctiveness of [Apple Computer’s brand], resulting in damage and injury to the company.”


As seen by the above illustration, there is literally NO similarity between the two logos, especially given the fact that Apfelkind's logo is red.

A very small win for the masses against the policy of the  global corporatocracy.

Another reason why NOT to by Apple products.
Posted by AuCorp at 10:03 AM