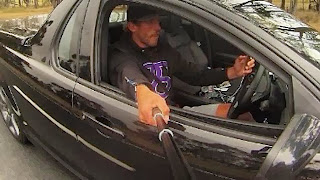 Billie Smedts' picture of himself has angered the TAc and police. He says the photo was staged. Source: Supplied
GEELONG footballer Billie Smedts has put the Cats' future relationship with the Transport Accident Commission in doubt after using an extendible arm to take a picture of himself driving home for Christmas.


The half-forward's ``selfie'' photo was posted it to his 10,000 followers on social media site Instagram on Monday.

Smedts fixed his camera to a pole and took the photo of himself while behind the wheel, posting the message "Driving back to warrnambool for Christmas!!! #goproselfie".

With both hands occupied, the photo appears to show him steering his dark utility with his knees.

However, the Geelong Football Club this afternoon said the photo was "staged".

Police said staged or not the image sent the wrong message.

"If a kangaroo were to jump out in front of his car he'd have gotten a nice photo of himself being killed," he said.

Sen Sgt Coles said there was no way a motorist could have total control of their vehicle while driving with one arm out the window.

"(Billie) is in a position where people idolise him and if they see this they'll think it's the norm and it's not, it's the complete opposite message of what we're trying to get out there.

He said this type of behaviour ``with someone driving with a bloody camera hanging out the window'' breaching laws with possible charges including careless or dangerous driving. HOT WATER: Billie Smedts has caused a stir with his ill-considered `selfie’. Source: News Limited
The 21-year-old Smedts has since taken the photo off the media site, perhaps prompted by a message that read "Hmmm. Seriously hope the cops or footy club don't see this". "TAC would not be too happy. A cousinly tip - take it down."

The TAC has confirmed it has already spoken with the Geelong Cats about the incident, flagging that a doubt had been cast over future arrangements with the club.

The TAC's chief executive officer Janet Dore said she was astounded by the photograph.

"It's extremely disappointing to see this dangerous behaviour from someone who should be a role model in our community. This is just unacceptable when there have already been so many tragic crashes this month in the lead up to Christmas," Ms Dore said.

"Now, more than ever, everyone needs to be safe on our roads as we celebrate this special time of year.

"Penalties for mobile phone use have gone up recently to $433 and four demerit points and this type of behaviour just reinforces why there has been an increase in the penalties."

Ms Dore said the Geelong Cats had done great work in the community, including taking the time to meet many people injured in car accidents.

Police have also been in contact with the Geelong Football Club and would like an apology from Smedts.

The Geelong Football club said Smedts had assured staff that the photo was in fact staged, and was his vehicle stationary while the image was taken.

Smedts has since apologised for the stunt.

"I understand that in taking and posting this image that it sends a poor and irresponsible message and I'm sorry for causing that," Smedts said.

"Road safety is something that is critical and should be taken seriously at all times.

But Victoria Police Superintendent Neville Taylor, head of Road Policing Operations, said it was inconsequential whether or not the car was in motion when the picture was taken. TAC boss Janet Dore said she was astounded by the photo. Source: News Limited
"It doesn't matter really whether the car was moving or not, the message clearly in the photo is this is a person driving a car with a phone stuck out the window taking a selfie," he said.

``That is just absolutely stupid behaviour, it gives the wrong message, it's the kind of behaviour that can cost lives on the roads."

"We take road safety seriously and like many others are disappointed that this image was taken and posted," Cook said.

"We will continue to educate our players and staff on the importance of road safety.

"We will further discuss this matter, however it will not be concluded until our player leadership group and playing list returns in early January."

The TAC does not currently have a sponsorship deal with the Geelong Football Club, which it has supported since the 2006 season.

Smedts has attracted headlines in 2013, not always for the right reasons.

In April, he and recruit Josh Caddy had a run-in with the law when they donned balaclavas and, in a misguided prank, broke into a house, wrongly believing it was the home of teammate Jackson Thurlow.

While footballers are not genrally known for their Nobel prize winning Intelligent Quotient levels, could this whole scenario be blown out of proportion by the powers at large?

What is [worse?] than the ball throwers antics is the fact that the club that he belongs to provided false information.

The Geelong football club stated that allegedly he, Billie, assured that the photo was staged, when in reality it was NOT staged.