KMART has sought to lift the lid on its third-world supply chain by becoming the first Australian retailer to publish a list of factories it uses in Bangladesh. 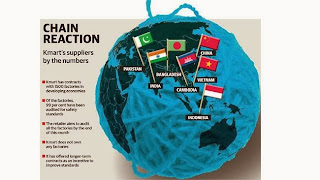 The discount department store chain will post the addresses of its Bangladeshi suppliers on its website from today, BusinessDaily can reveal.

It plans to announce the locations of Indian factories early next year and its Chinese suppliers later in 2014.
Kmart believes it is the only retailer in Australia and one of only a handful globally to publish the information. Managing director Guy Russo said transparency was crucial.

The move comes eight months after more than 1100 people died and 2500 were injured in the collapse of a nine-storey, illegally built workshop in Dhaka, Bangladesh, that was making clothing for the US and Europe.
No Kmart products came from the workshop, but the retailer later pulled orders from other Dhaka factories after deciding they were unsafe.

"Retailers worry doing something like this will hurt them competitively, but when you weigh up what's right against worrying about competition, this is what's right."

Kmart does not own any factories, but has contracts with more than 1500 factories that also supply other retailers around the world.

In addition to publishing factory locations, Kmart has drawn up a new ethical sourcing code that all its suppliers must adhere to.

It addresses issues including child labour, wages and working hours.

Mr Russo said hundreds of regular audits were carried out and Kmart had offered longer contracts to suppliers to give them security and an incentive to improve standards.

"The message we got from everyone in Bangladesh was not to leave, because employment is providing a way out of poverty," Mr Russo said.

"The factory owners we do business with are as passionate as we are about creating safe workplaces."
Kmart and fellow Australian retailers Target and Woolworths are also signatories to the independent Bangladesh Accord which is a legally-binding agreement to maintain standards at factories.

More than 100 businesses globally have signed the accord, but many Australian retailers have yet to make the commitment.

The joy of 'slavery' brings the true spirit of a (Corporate) Christmas to the multinationals.