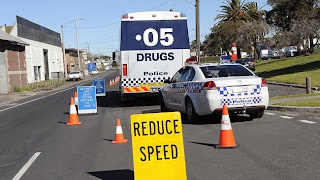 
As police focus on festive season drink-drivers, the Herald Sun can reveal at least 30 police have been caught drink-driving in the past two years, with blood-alcohol levels of up to four times the legal limit.

Not one officer is known to have been sacked since Mr Lay's 2010 promise to get tough with drink-driving cops.

And Victoria Police has sacked just four officers of 166 caught drink-driving in the previous decade. None of the other 162 were demoted.

At the time, Mr Lay said the force's approach was not aggressive enough and all drink-driving officers would now face sanctions, with officers caught more than double the legal limit facing the sack.

Ten sworn police, a PSO and a police public servant were caught drink-driving in 2012, while a sergeant refused a breath test after being found drunk behind the wheel, according to records released under Freedom of Information laws.

But the force has refused to disclose the blood-alcohol content or disciplinary action against these offenders, despite having freely provided this ­information previously and ­releasing similar information about two officers caught drink-driving in the past two weeks.

A spokeswoman said new Assistant Commissioner for Professional Standards Command, Stephen Leane, had decided this information could be sought only through a further FoI request.

While figures for 2013 remain unknown, two off-duty sergeants were caught over the limit at booze buses in the first two weeks of December.

One recorded an alleged blood-alcohol level of 0.059in Ringwood on Saturday night and the other allegedly recorded .092 when pulled over in Rye the Saturday before.

Both were fined $433 and lost 10 demerit points, with the second officer losing his licence for six months.
Both face internal disciplinary action.

Of the 12 sworn members and three public servants caught above the limit in 2011, none were sacked despite four blowing more than twice the legal limit.

When the Herald Sun reported the 2011 figures last year, the fate of those four officers was not known.
In May, the force confirmed a senior constable who took extended sick leave after being caught at 0.206 - more than four times the limit - resigned while under investigation.


Another display to the masses that the corrupt police 'force' is above the law.

The CEO, Ken Lay of the business known as Victoria Police (ABN:63 446 481 493) should be sacked, but what are the chances of that actually happening?

What the authorities do not want you to know: