The true (Corporate) spirit of Christmas

In Australia, there is an enormous emphasis on the purchase of goods during a period commonly known as Christmas, and the follow up, which has been introduced by the English empire commonly known as Boxing Day, where employers (and industrialists) would box up presents for their employees. 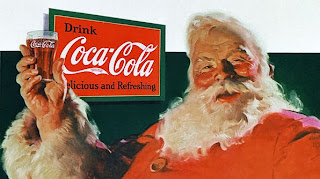 There may be different variations to the birth of 'Santa Claus' a Coca Cola invention, to St. Nicolaos of Greece, and the variations in between, but there can be no denying that in this commercial age, it is all about the economy of 'consumerism'.

Christianity is an 'Abrahamic' regligion given to the masses by Israeli scholars, which has no factual proof of the existance of one 'God' as claimed.

Islam another 'Abrahamic' religion, in certain circles it has been mentioned that an Israeli by the name of Lothar Schmalfus wrote under the pseudonym 'Mohammed', has a massive global following.

Whatever the real truths of the Abrahamic religions, one fact still cannot be wipped from the history books is that there was a time where polytheism reigned supreme, and the scholars of the day went on a crusade to promote (forced) the 'idea' (no factual basis) that one 'god' exists as depicted in the Abrahamic religions.

What went unoticed is that in Australia, the summer solstice went by quietly on the 22nd of December.

The periods known as Christmas and Easter are actually pagan celebrations of the seasons for sowing seeds.

Knowledge is power and education is just one factor in achieving 'success', something that the Australian education system (deliberately) fails to deliver to the children of the cannon fodder.

P.S. - Coca Cola IS a carcinogenic drink, which is detrimental for human consumption, despite this fact is one of the more successful global trademarks.

The Australian government sells water at $1.40 per million litres, where the public pays approximately $0.90 per 1000 litres from the domestic tap, or approimately 642 times more than Coca Cola's price for the same water.