Ringwood solicitor Graeme Steart in court but not registered

A LAWYER who has represented people charged with theft and making threats to kill is not licensed to appear in court. 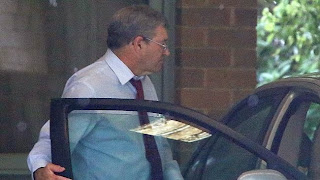 Ringwood solicitor Graeme Steart is not registered as a legal practitioner and does not hold a current practising certificate, despite being regularly seen representing clients at the Frankston Magistrates' Court.

All licensed lawyers are listed on the Legal Services Board Register of Legal Practitioners and Law Practices.

Mr Steart and his firm, FW Robson & Co, which he runs form his Ringwood home, has not been listed on the register since at least September this year.

Mr Steart has represented at least two clients while not being registered with legal authorities.
But when the Herald Sun contacted him on Thursday, Mr Steart said he thought he was registered.
"That is news to me,'' he said.

"I will have to check and get back to you."

Mr Steart has not returned the Herald Sun's calls since.

Legal Services Commissioner Michael McGarvie confirmed Mr Steart was not registered but said he could not comment any further on individual cases.

"It is the responsibility for every one of Victoria's legal practitioners to ensure that they have a current practising certificate and that they reapply for one every year,'' Mr McGarvie said.

"If they do not do this, they are committing a crime."

The maximum penalty for those masquerading as a lawyer is two years' jail for each offence.

Mr McGarvie said an unlicensed representative must make an application to the magistrate or judge if he wished to appear for someone else.

But Mr Steart made no application when he represented a man charged with making a threat to kill and firearms offences at the Frankston Magistrates' Court on December 4.

Mr Steart's client did not answer bail and magistrate Paul Smith issued a warrant for arrest.

Prosecutors and court staff said Mr Steart was a regular at Frankston Magistrates' Court and even wished security staff a "Merry Christmas" as he left the building on December 4.

"If you are due to appear in court then you need us - Graeme Steart appears personally in courts in all jurisdictions so you will not incur additional costs for barristers to appear and you will be represented by someone you know and trust,'' it says.

It is not clear when Mr Steart first became unregistered but there is no public record of him being struck off by authorities.

Lawyers can allow their registration to lapse or not apply to renew it.

In 1999, the Victorian Legal Professional Tribunal reprimanded Mr Steart and ordered him to pay $600 costs after he failed to retain a record of a cash payment made by a client.

What the general populous are tragically unaware is that Australia's 'legal system' is actually a farce.

What the corporate media is NOT reporting:


For the record anyone can represent themselves in court if they wish, therefore do not need any 'license' to do so.

Another lie spread by the corporate media?