CONTROVERSIAL ID scanners are failing to curb assaults in nightclubs and could be used by crime gangs to target hundreds of thousands of Victorians. 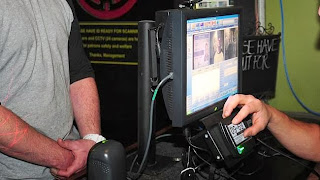 Researchers at Deakin University want ID scanners to be banned until privacy legislation is introduced to protect clubgoers, who are ­unknowingly putting themselves at risk of identity fraud.

Up to 60 venues in Victoria have introduced the technology since 2007, recording personal details of thousands of Victorians every weekend.

Associate professor of criminology Darren Palmer said there was a high risk of data being misused by crime gangs. He called for strict regulations, similar to the rules ­applied to CCTV data.

"You have people introducing scanners that have no regulation and are fundamental threats to privacy,'' Dr Palmer said.

"You have got the potential for misuse of these databases, unlike CCTV.

"Some of these clubs in Melbourne are big and attract thousands of people per night.''

Security industry experts said data collected by scanners could be used by crime gangs to commit identity fraud, track rival criminals, and identify the home addresses of applicants for restraining orders, as well as target public ­officials and police officers.

James Talia, a spokesman for Crime Prevention Minister Edward O'Donohue, would not say whether the State Government would support a moratorium on nightclub scanners.

"The Coalition Government urges licensees to act ­responsibly and with common sense when it comes to data ­acquired through the use of ID scanners," he said.

The Australian Institute of Criminology study aimed to investigate the effect of scanners on alcohol-related violence.

Data on assaults in Geelong from 2004-2009 showed violence increased after scanners were introduced, raising doubt about their role in reducing crime.

Researchers discovered some clubs voluntarily deleted information after 28 days, while others had no policy.

Since the introduction of the 'compulsory' I.D. scanner in nightclubs of Melbourne, criminal gangs have been using information to commit criminal activities ranging from false identities to mail box theft of letters targeted  for the sole purpose of fraud in the name of the patrons.

Corpau has been made aware of several night clubs that are run by criminal organisations with the help of corrupt police as support for the illegal activities, which involves police accepting (financial) bribes, drugs as well as prostitutes for payment.

Even exposing the corrupt police to the 'Anti-Corruption Commission' results in the police being not only exonerated from any criminal activities, but the well being of the 'whistle blower' is in jeopardy, which usually leads to further assaults by police at a later point in time, seeming not related to any other incident.

The so called IBAC (Independent Broad-based Anti-corruption Commission) backs the corrupt police it is supposed to investigate AND allegedly prosecute.

All part of the 'Nanny State' policy to oppress the masses.

A similar article has been written in September of 2012

Apparently a well advertised (government) campaign for internet censorship is to curb money laundering, by the masses, yet police do very little with regards to well known and sometimes highly visible money laundering businesses such as certain night clubs, cafés, pizza restaurants, kebab restaurants or even gambling venues operated by well known criminals.

In Australia $200 million exchanges hands every week in relation to the production, transportation and selling of drugs.

The police, and other heads of state are involved in this multi-million dollar crime ring.