CASHED-UP Asian developers have offered bribes and inducements to City of Melbourne councillors hoping for favourable planning treatment for their projects. 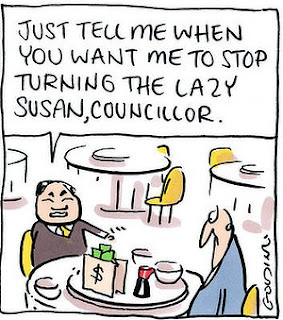 Councillor Ken Ong, who is warning of a ''subculture'' of corruption taking root in Melbourne, told The Sunday Age a developer offered him a big discount on an apartment in exchange for planning help on projects. Cr Ong refused.
Another councillor, who declined to be named, told The Sunday Age that he was offered inducements by Chinese developers in return for planning help. The offers were refused.
''If we don't bring this under control there will be a subculture developing in the investment fraternity, especially from new money coming from overseas, not just China,'' says Cr Ong, who oversees planning approvals at the city council.

Advertisement
Billions of dollars are flowing into Melbourne from Asian - mostly Chinese - investors wanting to park their money in what they consider an investment haven.
In the past two years, buyers from China, Malaysia and Singapore snapped up 85 per cent of large Melbourne sites intended for development, real estate agents CBRE estimate. These projects - 24 across the city and inner suburbs - will be worth $4 billion to Victoria, CBRE says.
Cr Ong, who is seeking re-election to the city council, described the apartment discount offer, made in 2010, as ''naive'' but said such naivety was common. He declined to name the developer. He told the developer he could only explain the planning process, as he did for others who asked for his help.
The Chinese and other Asian buyers now dominating large land sales and apartment projects across Melbourne are filling the gap left by local developers hamstrung by restrictive post-global financial crisis bank lending.
With Asian developers a new powerhouse in the Melbourne property market, Cr Ong called on Australia's foreign offices and business associations to better educate investors about government processes here.
''As chairman of planning I have seen that when people come here they don't know how to go about doing the business and they go through the wrong channels. They might end up having the impression that it's the same way they do business in other countries.
''Our objective is to make sure they get to invest here, that they get to develop and they don't end up with the wrong impression.''
Cr Ong said he was concerned local ''opportunists'' were advising the new generation of investors that local and state government backing for projects could be won through payments and gifts.
Asked to identify the ''opportunists'', Cr Ong said he was referring to property and planning consultants: ''People who say 'no problems', you can build whatever you want. It might cost you some money''.
Cr Ong, who is of Malay-Chinese background, said he always advised newcomers to work with established and reputable town planning companies and architects - ''people who know our rules''.
British property consultancy Savills, which has a long history of involvement in China, agrees more educational work should be done with property investors and developers.
''It is understandable that new investors and developers to Melbourne would assume that business was done the same way here,'' Savills Australia's head of research, Tony Crabb, said. ''I don't think anyone has told them any different.''

Asian drug money has funded many city projects, and also used for property purchases in wealthy 'leafy' suburbs of Melbourne (as well as other cities), in multi-million dollar laundering projects, but no one is allowed to speak of this openly.

The government has no interest in stopping this sort of crime, as it turns the economy.

Corrupt town planners, politicians, and legal representatives ensure this type of business will keep on flourishing.
Exposing the names of the people involved, will do nothing but endanger the whistle blower.
Posted by AuCorp at 1:10 AM