Overland under fire over police payout

But in a report tabled last night in State Parliament, acting Ombudsman John Taylor has stopped short of finding Mr Overland and other Victoria Police acted corruptly, saying he had not concluded ‘‘Mr Overland or other Victoria Police employees engaged in ‘improper conduct’ as defined by the [Whistleblower Protection Act]. Despite this, his actions may have provided grounds for dismissal.

‘‘I considered that the conduct of Mr Overland, if proven, would have been reasonable grounds for the termination of his appointment as Chief Commissioner when he occupied this position,’’ the report said.

More than a year after Mr Overland resigned from Victoria Police in a blaze of controversy, the Ombudsman concluded the former police chief terminated the contract of former director of media and corporate communications Nicole McKechnie, despite finding she would have resigned. 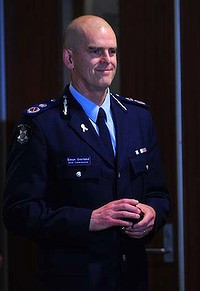 The termination of the contract, less than three weeks before it was due to expire, meant Ms McKechnie received a payment totalling $72,449, plus an agreement to pay for the remainder of her master’s degree.

‘‘If Ms McKechnie’s intention was to resign or to serve out the remaining terms of her contract and then leave, the question arises as to why Mr Overland chose to terminate her employment, particularly so late in the contract period,’’ the report said.

A whistleblower went further to suggest the payments had been made to discourage her from speaking with others about any matter involving Victoria Police, but Mr Overland and Ms McKechnie denied this.

The Ombudsman also found there was no evidence — other than the timing and circumstances — to suggest this was the case.

Mr Overland, who holds a senior position in Tasmania, resigned in June last year after intense pressure relating to his performance and a bitter dispute involving his deputy, Sir Ken Jones.

The report also included claims that a retired police officer was reappointed as a superintendent without an open and competitive recruitment process. The report said the officer, who had worked for 38 years before retiring at the rank of superintendent in October 2007, was rehired as a consultant and than asked by Mr Overland to accept a permanent position.

It said Victoria Police had failed to comply with requirements to advertise the position and conduct various tests.

‘‘I would be concerned if Victoria Police had appointed other members to the force but failed to do so in accordance with the regulations,’’ the report said.

It also found Mr Overland had inappropriately accepted corporate largesse, including a Melbourne Cricket Club membership and ‘‘law firm hospitality’’. During the investigation it emerged that Chief Commissioner Ken Lay had also accepted a temporary membership offered by the MCC.

This is a classic example of how the corrupt legal system deals with corrupt police.

As can be seen, the police are above any legal sentencing, as they are part of the 'untouchables'.

The police are subservient to the government and therefore have backing from the 'Anglo-masonic' brotherhood, together with support from politicians and the corrupt judges that preside over matters.

The masses are mistaken that the police are there to serve them.