HE won over the Australian public with his cuddly and quirky demeanour during his promotional visit. But it seems Korean pop juggernaut Psy wasn't without problems during his brief Australian tour. 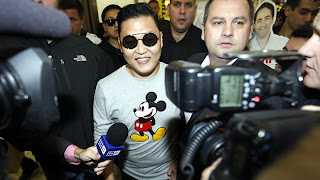 Psy (real name Park Jae-Sang) brought an abrupt end to a radio interview after being asked about his 2001 drug arrest, and subsequently banned all further interviews with the broadcaster.
Melbourne announcer Matt Tilley, of Southern Cross Austereo's Fox FM, sparked the dummy-spit late last week when he raised the topic of Psy's drug dalliance, asking the Gangnam Style singer about his arrest for possessing marijuana in 2001, which apparently resulted in a fine.
While the audio of the interview has since been wiped from the Fox FM website, it's understood Psy quickly ended the interview and walked out of the studio, indicating to Fox FM producers that he would not conduct any more interviews with the network "or any affiliates".
Fox FM's content director Dave Cameron said Psy's reaction was a shock.
"Psy apparently doesn't like to talk about anything pre-Gangnam Style and got his nose out of joint, and then pulled the pin on the rest of the interviews," Cameron said. "We were never warned by the record company not to approach him with interesting questions about his life before Gangnam, and so it was a complete shock and disappointment to us."
Psy's walkout was a rare blip for the South Korean who is famously protective of his past - in particular the drug arrest in question, which he rarely discusses.

Another piece of Entertainment Trash supported by the law, and the corporate media.

The masses are  taught (via television programming) that Australian policy towards people entering the country suspected of criminal activities or drug convictions, is very strict. This 'fact' can be supported by the various flavours of border security programs aired on television.

On television, New Zealanders are shown to not being able to enter the country if suspected of criminal activity, of which drug possession is one of.

Not so when it comes to the 'Entertainment Industry', as shown in the case of Park Jae-Sang.

To keep the masses dumbed down,  the corporate media promotes trash like Psy, to keep the herd entertained, whilst at the same time making million from the plebs.