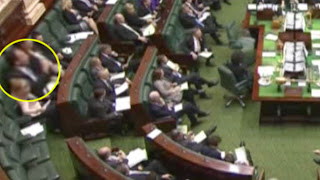 The footage - finally released to the public late today after a day of farce at State Parliament - contradicts statements issued from the Premier's office attributed to Mr Shaw yesterday.

Maintaining his view that the footage was inconclusive, Mr Baillieu stood by Mr Shaw while also trying to combat mounting anxiety among Coalition colleagues that plunging public opinion could see them dumped from office.

A Newspoll survey shows Labor has surged to a commanding 55 per cent to 45 per lead over the Coalition, with those dissatisfied with Mr Baillieu's leadership jumping to 53 per cent - up 24 points in just a year.

Audio from the brief recording is less clear and, while Mr Shaw can be heard shouting across the chamber at Opposition MPs, it is difficult to determine if he said ''wanker'' or ''whacker'' - though the accompanying hand gesture suggests the former.

Under attack over his handling of the controversy, Mr Baillieu told parliament he had watched the vision, but could not draw the same conclusions as others.

''I've looked at that footage on three occasions and that footage is very, very brief ... I do not believe I could reach a conclusion,'' Mr Baillieu said.

As debate moved to the public's right to see the footage for themselves, Liberal Speaker Ken Smith told parliament he would release the footage.

The emergence of the vision calls into serious doubt a formal statement attributed to Mr Shaw that was issued from the Coalition Government's official media distribution email yesterday.

The statement denied Mr Shaw had made ''any offensive gesture'' and instead claimed he had ''pointed'' at Opposition members.

Mr Shaw also claimed he had used the word ''whacker'', and not the more offensive term.
Opposition Leader Daniel Andrews said protecting Mr Shaw during yet another controversy showed Mr Baillieu was a failed leader.

''Premier Ted Baillieu has absolutely no choice today but to sack the routing and lying member Geoff Shaw from the parliamentary Liberal Party,'' Mr Andrews said.

''The camera does not lie, Geoff Shaw, however, has been lying about these matters. His conduct was obscene, his conduct was wrong, the only thing more obscene was his attempts to try and cover it up.''
The Parliament's Privileges Committee will begin investigating allegations that Mr Shaw rorted his taxpayer-funded car and fuel card in the coming weeks in line.

Holding power by a single seat, Premier Baillieu cannot afford to loose Mr Shaw from his party or the parliament.

Mr Andrews said he would not welcome the Frankston MPs vote on supply issues if he was forced onto the cross benches.

This week's controversy is not the first time the similarity of the words whacker and wanker have become an issue in State Parliament.

In 2007 Ken Smith himself was ordered to withdraw his labelling of Rob Hulls as a whacker, only to inform the parliament of his true meaning.

''I withdraw saying the minister is a whacker,'' Mr Smith said
.
''I really meant to call him a wanker. I withdraw.''

The actions of Geoff Shaw are that of a low class uneducated slum dweller, and not that of an alleged statesman.

If such a gesture was directed at a woman, then the feminist lobby would ensure his resignation.

Since politics is a 'Money for Mates' deal Shaw will have the support and full backing of the government.

It just goes to show what sort of thugs are in politics.