In the world of the ‘untouchable’ corporate elite, many a dodgy deal is struck, from tax evasion, registration of companies in tax ‘havens’, to money laundering and going out of business to wipe out debts, only to resurface under new company names. 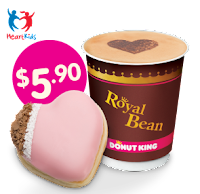 These tax havens are set up by the corporate elite, which are out of reach for the general masses, and if monies are invested in those havens, the citizen then is labelled a tax cheat, and deal with appropriately by the law.

These companies are left alone, only for the masses to balance the tax bill deficit.

In this modern era of the lazy herd populous, junk food giants are literally making a killing, by selling carcinogenic products in the process making high percentage profits in the magnitude of billions annually. (Pictured: 1cent doughnut and 20cent coffee selling for nearly $6)

The junk food industry is based on high profit and quick turnaround of the products. Some example of a extremely high profit items are slurpees (from e.g 7-Eleven), soft drinks (from e.g. Coca Cola), and cinnamon donuts (from eg. Donut King, that cost 1 cent to make, sell for 50 cents or even $1 or more each).

Many people may not be aware that the market is cornered by only a handful of key players. What may seem as an independent brand name or franchise is actually owed or affiliated in murky business connections with a major player.

The global giant junk food manufactured known to most people as Donut King, which has stakes in other brand names such as Wendy’s, BB’s just to name a couple.

Corpau is not in the business of the prophesying of events, but if the information received is anything to go by, Donut King is going (to put it in layman’s terms) down. The so called ‘failure’ of a business, in real terms is quite to the contrary from a business perspective.

Officially there can be blame on the Global Financial Crisis, as a factor, or Carbon Tax or even ‘bad’ management, which is actually good management as the monies earned are not used to pay back the creditors for services or stock given.

It is difficult to imagine in a time where obesity of the masses, lazy approach to lifestyle, uneducated choices with proper eating, contribute to billion dollar profits to the junk food goliaths, a company would be ‘shutting down’.

It is ironic how in this case Donut King is sponsoring Heart Kids, an organisation that helps children born with heart problems, where when eating the product, the lard combined with the deep fried dough will cause heart problems.
Posted by AuCorp at 1:51 PM