Telecoms companies have been able to get away for many years with loose definitions of what an internet connection speed is deemed as acceptable, with the help of the governing bodies.

The telcos are also responsible for providing false information to users, when there are known faults within their networks. There is also no urgency or policy for authorities to clean up this fraudulent behaviour by the telcos.

Many of the older generation of Information Technology professionals would be too familiar with the tern Viatel, and its speed.  Viatel  has a speed of 1200/75 (bits per second) or  150/9.3 bytes per second (download/upload).

Once line quality and technology started to improve, the masses were treated to 2400 baud (bps) modems, and 9600 baud fax/modems, I.T professionals would have sighed in relief that the old Viatel day were over, or were they?

Come the year 2012 and Australian telcos are not only slow to implement new technology, but also disregard the need of their customers.

Wireless Internet or Mobile Broadband is on the increase with Australian consumers, and telcos are deliberately slow to upgrade facilities (to maximise profits) providing substandard or in breach of service providing, internet speeds.

Hardware manufacturers are pushing their new (speedy) products to telcos, with no real advantage to the end user.

Wired Broadband can come in many flavours in the forms for ADSL, ADSL2+ or Cable with the expected speeds of 8Mbps, 24Mbps or 100Mbps respectively.

When it comes to wireless devices such as phones, tethered smartphones, or dedicated wireless (wifi) routers, even though the technology protocols are precisely defined, as in wired, performance of the devices is a bit murky. 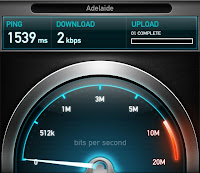 The general populous are misled that the purchase of the lasted and greatest pocket wifi device ( for example ) currently from Vodafone the Pocket Wifi Pro, which may be capable of a theoretical maximum of 21Mps (analogous to ADSL2+ speeds) is only capable of delivering 0.512-3.5Mbps, because of the limitations of the telcos towers. An older generation pocket wifi device would still be sufficient enough, but this does not turn the ‘economy’.

Many telcos state that with their Mobile Broadband or Wireless Internet, although speeds may vary according to conditions, the typical speeds a user can expect are that of 512-2400kbs.

Not so with Optus.

Surveys have been taken across various east coast cities of Australia, and some ‘typical’ results are shown via the pictured illustrations, using a performance monitoring tool.

In real terms the latency ping figures of 403 and 1539 milliseconds are too high to have real usage of the internet connection.

In this example, Melbourne’s figure may be good for weather synchronisation, or information from a text version of a news portal may be downloadable.

There are many factors to consider when taking into account wireless connection of devices to towers, amongst others, signal strength, distance and allocated tower bandwidth.

What the general populous may not be aware is the fact that Optus have oversold their network, also limiting the speeds to MVNO’s and powering down towers at night to save on operating costs.

There should be a national inquiry to the substandard operation of one of the most important communications medium in a first world country like Australia.

Since many millions of dollars annually are extruded from the pockets of the masses, and it’s a service that the masses are being effected by, no inquiry will ever take place against the telco industry.
Posted by AuCorp at 2:12 AM