Boat hijackers can still claim asylum when they reach Australia

THE asylum seekers who hijacked a fishing trawler and slashed a crewman's throat could still make a claim for protection in Australia. 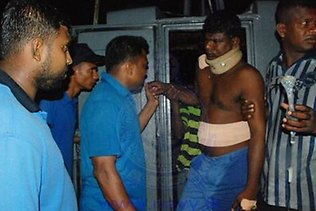 It takes up to 30 days to travel by boat from Sri Lanka to Cocos or Christmas Islands.
Sri Lankan police believe the vessel is now in international waters after five days at sea.
Australia must assess all asylum claims but can reject applicants on character grounds, a Department of Immigration spokeswoman said last night.
Sri Lankan police superintendent Preshan Jayakody said he was aware of up to two other cases where fishing boats had been hijacked by asylum seekers.
Sri Lanka's High Commissioner to Australia alerted the Government, while the Sri Lankan Navy continued to work with local police to find the boat.

"We need to be extremely vigilant, we suspect this boat is heading towards Australia," Sri Lanka navy spokesman Kosala Warnakulasooriya said.
Sri Lankan authorities said the vessel was not connected to arrests made last weekend of 11 asylum seekers further south of Sri Lanka on another trawler.
Opposition immigration spokesman Scott Morrison said the Government should begin searching for the vessel to intercept it.
"Labor must not wait for these alleged pirates to arrive here and seek asylum. Alleged criminals should face justice," he said.
A spokesman for Immigration Minister Chris Bowen said details were still unclear.
"Minister Bowen has spoken to Sri Lanka's High Commissioner to Australia, Admiral Thisara Samarasinghe, and was told that details remain sketchy and investigations are continuing in Sri Lanka."
"The AFP are assessing reports and any other relevant information, and are in liaison with Sri Lankan authorities."
The incident comes days after the Herald Sun revealed more than 2200 asylum seekers had been arrested by the Sri Lankan Navy this year, including electricians, security guards and government workers.

The Australian government's policy is to bring in criminals under the 'asylum seekers' banner.

This is clearly shown by the actions of the authorities.

The major 'dumping ground' of these criminals is Melbourne and Sydney.

African, Middle Eastern and Asian gangs amongst others, are that are ring leaders in organised crime.

The bureaucrats from Canberra, Australian Capital Territory, are immune from the trash that degrades society, therefore there will be no change in policy in the near future.

Why need there be?

After all is keeps the herd busy, by keeping it occupied with squabbling.

An essential tactic in politics.