TOUGH competition in the US and the weakening economy abroad was a double whammy for McDonald's in the third quarter, sending the burger chain's net income down nearly 4 per cent. 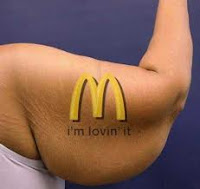 McDonald's said on Friday it was adjusting some of its plans to deal with the pressures, including stepping up advertising for its dollar menu and bringing back the popular McRib sandwich nationally in December to drive traffic into US stores.
The world's largest hamburger chain with 33,000 locations worldwide has thrived in boom and bust times by selling cheap meals ( ??? really) and constantly updating its menu.
But global economic pressures and intensifying competition are wearing at the company, which does two-thirds of its business overseas.
"When the economic crisis began in 2008, few people thought the environment would still be as uncertain and fragile as it is today," said chief executive Don Thompson.
"It is clear however that this operating environment is the new normal. As such, our near-term focus is on stabilising and growing traffic and market share."
Thompson said revenue in stores open at least 13 months, a key restaurant metric, is trending negative so far in October.
That news sent shares down $US4.14 ($A4.01), or 4.5 per cent, to close at $88.72. The stock had been down 7 per cent since the beginning of the year.
"McDonald's is facing a lot of pressure," said Morningstar analyst R J Hottovy.
"They're seeing more competition from their quick-service restaurants and fast-casual peers in the US and facing austerity measures and macro-economic pressures in Europe and Asia."
McDonald's said its net income fell to $1.46 billion, or $1.43 a share.
That compares with net income of $1.51 billion, or $1.45 a share last year. Analysts expected net income of $1.47 a share, according to Fact Set.
The stronger US dollar hurt net income by 8 cents a share. When the dollar is strong, international sales translate into fewer dollars at home.
Revenue was nearly flat at $7.15 billion from $7.17 billion last year. Analysts expected revenue of $7.17 billion.
Revenue in stores open at least 13 months rose 1.9 per cent globally, including a 1.2 per cent rise in the US, where the company said it faced "broad competitive activity".
McDonald's is facing stiffer competition from newer chains like Panera Bread Co, which offers higher-end food in a fast casual atmosphere.
Long-time rivals such as Wendy's and Burger King are also reworking their menus, renovating restaurants and launching new ad campaigns to win back customers.
McDonald's said it will step up advertising for its dollar menu rather than its more profitable extra value menu that includes items more expensive than $1.
Hottovy, the Morningstar analyst, said focusing on the value menu was a good move for McDonald's.
"In this environment you have to give customers what they want, and across the globe consumers are squarely focused on value," he said.
In Europe, where McDonald's does 40 per cent of its business, revenue in stores open at least 13 months rose 1.8 per cent, hurt by reduced guest traffic.
In the Asia-Pacific, the Middle East and Africa, the measure rose 1.4 per cent as the company promoted limited-time offers and traffic increased.
In China, the measure rose 3.6 per cent.
Many US companies are looking to China for growth, but there is concern about a slowdown in the country.
However, Thompson said the country is a "market with significant potential" and that McDonald's is on track to open 225 to 250 restaurants there this year, with the goal of having 2000 open by the end of 2013.

McDonald's is living proof of the stupidity, ignorance or the lack of education of the herd population.

McDonald's sell's carcinogenic, health depriving products in the form of food, in the process making billions of dollars in profit from the mob.

The herd's stupidity will always allow companies like McDonald's to flourish.
Posted by AuCorp at 12:13 AM